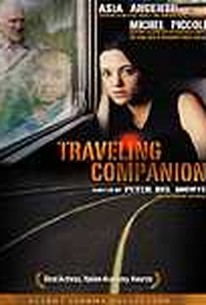 This is a movie about walls, no not physical walls of wood and stone, but the psychological walls that protect and ultimately imprison certain souls, effectively isolating them from the most teeming crowds. 19-year-old Cora's are walls of anger that keep her militantly aloof from the world around her. The much-older Cosimo's walls are harder to define. Suffering from debilitating bouts of forgetfulness, he lives in a whimsical world, wandering whenever the urge strikes him. His wanderlust greatly worries his daughter Ada, herself trying to surmount the fences erected between her husband and herself as they try to deal with Cosimo. She hires Cora to surreptitiously watch Cosimo and to keep him from harm. At first Cora is content to quietly trail the oblivious Cosimo on his daily jaunts around the city, but as time passes she finds herself drawing inexorably nearer to the old man. One day Cosimo just gets on a train and randomly visits numerous towns with Cora forced to follow. Eventually they end up in the country where Cora shows that she is not as hard and cynical as she seems. She then informs Ada of her father's latest escapades, but eventually Cora comes to accept the professor as he is and in so doing finds new insight about herself. ~ Sandra Brennan, Rovi

There are no critic reviews yet for Traveling Companion. Keep checking Rotten Tomatoes for updates!

There are no featured reviews for Traveling Companion at this time.