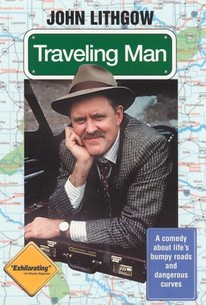 John Lithgow sets aside his patented drooling villainy to play the sympathetic title character in Traveling Man. Beset by business and marital problems, salesman Lithgow feels as though he's at the end of his rope. But it's at this point that he avoids the Willy Loman syndrome by realizing that there's more to life than a smile and a shoeshine. Fade-out salvation arrives in the lovely form of Margaret Colin. Jonathan Silverman co-stars as Lithgow's eager-beaver assistant, while John Glover is slime personified as the sales manager. Written for television by David Taylor, Traveling Man debuted June 24, 1989, over the HBO Cable service.

Alex Van
as Buddy
View All

There are no critic reviews yet for Traveling Man. Keep checking Rotten Tomatoes for updates!

There are no featured reviews for Traveling Man at this time.