Travels With My Aunt1972 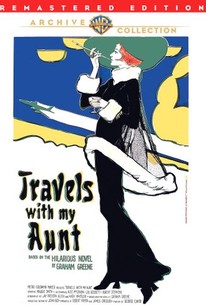 Travels With My Aunt Photos

In the lively comedy/adventure Travels with My Aunt, adapted from Graham Green's book, Henry (Alec McCowan), a timid, bookish accountant whose life seems to have died stillborn, discovers how to live with gusto thanks to the rough ministrations of his thoroughly eccentric aunt Augusta (Maggie Smith). Aunt Augusta bursts into Henry's life during the funeral for his mother, Augusta's sister. She whisks him to her apartment for a general cheering up, and he is thoroughly bemused by her bohemian ways and her much-younger black Caribbean boyfriend. In the next few hours, she manages to pry him from his dusty life and involve him in a series of incredible adventures involving old love affairs, espionage, kidnappings, and more money than he has ever dreamt of. Before the story ends, Henry has properly gotten into the spirit of his madcap aunt's adventuring.

Olive Behrendt
as Madame in Messagero

Javier Escrivá
as Dancer in Messagero

Critic Reviews for Travels With My Aunt

You'll have a wonderful trip with Travels.

One of George Cukor's last (and least impressive) pictures, this version of Graham Greene's eccentric comedy is thematically similar to Auntie Mame but suffers from Maggie Smith's overly stylized turn and lack of rapport with Alec McCowen as her nephew.

Dampened by a hammy over-theatrical performance by Maggie Smith, too much useless gab and too many contrived plot turns.

Maggie Smith is grand in the multi-level role of Aunt Augusta -- posturing, leaning and croaking as the ancient lady, breathless and wide eyed as the girl suddenly introduced to romance.

Audience Reviews for Travels With My Aunt

Maggie Smith is a delight but this type of tale seems most appropriate for children to watch on a Disney afternoon while the parents nap.

Maggie Smith shines as the larger than life Aunt.

Travels With My Aunt Quotes