The Treasure of the Sierra Madre1948 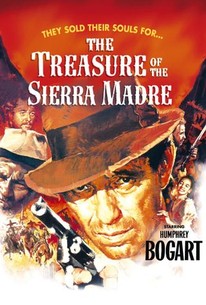 The Treasure of the Sierra Madre Photos

John Huston's 1948 treasure-hunt classic begins as drifter Fred C. Dobbs (Humphrey Bogart), down and out in Tampico, Mexico, impulsively spends his last bit of dough on a lottery ticket. Later on, Dobbs and fellow indigent Curtin (Tim Holt) seek shelter in a cheap flophouse and meet Howard (Walter Huston), a toothless, garrulous old coot who regales them with stories about prospecting for gold. Forcibly collecting their pay from their shifty boss, Dobbs and Curtin combine this money with Dobbs's unexpected windfall from a lottery ticket and, together with Howard, buy the tools for a prospecting expedition. Dobbs has pledged that anything they dig up will be split three ways, but Howard, who's heard that song before, doesn't quite swallow this. As the gold is mined and measured, Dobbs grows increasingly paranoid and distrustful, and the men gradually turn against each other on the way toward a bitterly ironic conclusion. The Treasure of the Sierra Madre is a superior morality play and one of the best movie treatments of the corrosiveness of greed. Huston keeps a typically light and entertaining touch despite the strong theme, for which he won Oscars for both Director and Screenplay, as well as a supporting award for his father Walter, making Walter, John, and Anjelica Huston the only three generations of one family all to win Oscars. ~ Hal Erickson, Rovi

News & Interviews for The Treasure of the Sierra Madre

View All The Treasure of the Sierra Madre News

Critic Reviews for The Treasure of the Sierra Madre

Transcends the medium to become a mandatory viewing experience for anyone that identifies themselves as a human being, period.

This is so brilliant that the only real effect of the other versions is to make you want to watch the original again.

John Huston has rarely been in better form than in this 1948 study of gold fever and worse obsessions among an unlikely trio of prospectors...

There's a quite enjoyable yarn buried under the hollow laughter.

Riveting, downbeat, and surprising, a gripping adventure and one of Hollywood's most resonant morality tales… a smart, remorseless story of gold, greed, guns, and guile.

The movie has never really been about gold but about character, and Bogart fearlessly makes Fred C. Dobbs into a pathetic, frightened, selfish man -- so sick we would be tempted to pity him, if he were not so undeserving of pity.

Wildly unconventional for its time, it makes its A-list star a villain, there's no romantic subplot, and it's far grimmer than most movies of the age.

The film is about the power of human greed. From the moment Dobbs sees that first seam of pyrite, he is obsessed...

This attraction, produced by Henry Blanke, is never pretty, but it has guts and substance. And also Bogart.

Aside from a dark lesson in moral corruption, the film serves as a monumental achievement in storytelling and balanced entertainment.

What an incredible film.

It's a passionate minor movie where the image is the simple support of a powerful story. [Full Review in Spanish]

Audience Reviews for The Treasure of the Sierra Madre

John Huston made quite a name for himself back in the day with the simple trick of presenting the story from the antagonist's point-of-view, and we are with him (Bogie as Fred C. Dobbs) as he slowly begins to slide into disconnection all the while clasping onto sanity with all the power at his command. Huston gave the protagonist role to his grudging father (Walter Huston), and you can really see him frame the codger in a favorable light (and see ol'Walt love it), but its Bogie's film (everyone knows) no matter who got the Oscar. Tim Holt does well as the unsung third wheel. The bar fight is an exceptional piece of work in a film loaded with intimate gems of moments, not the least of which is Bogie begging for money.

Walter Huston steals the scene and deserved the Oscar he won, but Bogart was unfairly not even nominated for his phenomenal performance in this classic that is all at once a light adventure, a riveting character study and a powerful morality tale about greed and paranoia.

Two down at heel Americans stranded in the backwaters of Mexico use the last of their money to go searching for gold in the company of grizzled old prospector Walter Huston. Unfortunately when they strike it rich, avarice turns them against each other resulting in deceit and murder. John Huston's classic story of greed is based upon The Pardoner's Tale from Chaucer's The Canterbury Tales. It's basically a morality story warning of the dangers of greed and how the promise of wealth can blacken a man's heart; in this case Humphrey Bogart in quite possibly his finest performance. Huston is also marvellous as the pragmatic and worldly wise old geezer who predicted everything that occurs to the disbelief of his initially wide eyed and enthusiastic partners. The suspense builds tangibly as the former friends become more and more suspicious of each other, all three at one point or another tempted to stab each other in the back for their share of the goods. It's a brilliant story, expertly told by some of the best in the business and one of the true cinematic greats. One of those films anyone who calls themself a movie buff must surely have on their list.

A classic tale of greed and gold, John Huston proves to be at the top of his form with 'Treasure of the Sierra Madre'. Thanks largely to the great performances of its three leads and a brilliant script, the film easily stands the test of time and proves to be potent and relevant, even for today's standards.

The Treasure of the Sierra Madre Quotes