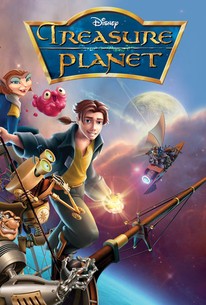 Critics Consensus: Though its characterizations are weaker than usual, Treasure Planet offers a fast-paced, beautifully rendered vision of outer space.

Critics Consensus: Though its characterizations are weaker than usual, Treasure Planet offers a fast-paced, beautifully rendered vision of outer space.

Critic Consensus: Though its characterizations are weaker than usual, Treasure Planet offers a fast-paced, beautifully rendered vision of outer space.

Fifteen-year-old Jim Hawkins stumbles upon a map to the greatest pirate trove in the universe. The tale follows Jim's fantastic journey across a parallel universe as cabin boy aboard a glittering space galleon. Befriended by the ship's charismatic cyborg (part man, part machine) cook John Silver, Jim blossoms under his guidance, and shows the makings of a fine spacer as he and the alien crew battle supernovas, black holes and ferocious space storms. But even greater dangers lie ahead when Jim discovers that his trusted friend Sliver is actually a scheming pirate with mutiny in mind. Confronted with a betrayal that cuts deep into his soul, Jim is transformed from boy to man as he finds the strength to face down the mutineers and discovers a "treasure" greater than he had ever imagined.

Dane A. Davis
as Morph

Tony Jay
as Narrator
View All

Kidman & Kinberg to Collaborate on a Lady Spy Flick
Pixar, Disney on the Outs

By following its story as closely as they have, the filmmakers have retained much of what made the novel a classic.

It's laced with literate humor, and the directors cite N.C. Wyeth's illustrations for the 1911 Scribner's edition of Treasure Island as the inspiration for their marvelously detailed fantasy world.

While Pixar can do no wrong with its cutting edge CGI originals, Disney is falling back on old formulas

The film's signature imagery is impressive and there are some good set-pieces.

Without the pizzazz of computer animation you can see how it will struggle to find its target audience.

A splendid adventure film that doesn't mistreat its characters under the weight of the most hackneyed archetypes of the company. [Full Review in Spanish]

Another artistically masterful animated classic from Disney, Treasure Planet is like a super-nova, energetically exploding in a panorama of eye-popping candy colors.

To me it felt tedious, but I admire what they were trying to do.

The addition of an insufferable robot named B.E.N. (Martin Short) cripples much of the film's momentum and renders many of the latter scenes unwatchable (a friend once dubbed B.E.N. "the Jar-Jar Binks of animation," and she was absolutely right).

Given the amazing artwork, if a better character [than a cyborg John Silver] had been inserted, we'd be talking about "Treasure Planet" as another Disney classic.

OH MAN! Where do I start? Treasure Island is one of my favorite novels for thing and Sci-fi is one of my favorite genre, and I love animation, combine all of those things and you get this film. Treasure Planet is a Disney film, no FILM in general that gets everything right. The characters, music, animation, its just all flawless. Joseph Gordon Levitt does a great job at making Jim Hawkins out to be a delinquent and plays it very well and makes him very likable and the relationship he shares with Silver is probably my favorite character relationship I've seen in a film just how well these two work off each other just makes for some great emotional scenes and some great rivalry at the same time. David Hyde Pierce plays Dr. Delbert Doppler and he does a very good job at playing this neurotic scientist out and the relationship he shares with the captain is a great loving relationship, which is the best thing this film gets right which is the relationships which it gets down amazingly well. The film also has a very subtle sense of humor in the robot B.E.N. played by Martin Short and the scenes involving this gelatinous alien blob named morph. Also the animation in this film is hands down Disney's best in my mind. The designs of the ships and the aliens are all original and very creative and the designs of the planets are all very interesting to look at. Also the film has very good build up to very emotional scenes and the ending is one of the biggest tear jerkers I've seen in an animated film. Also this film has one of my favorite side villains ever, Scroop.while not a main focus, he really is the biggest evil entity in this film being the only character to kill another main character off in the film and rather grisly as well. Treasure Planet is just a film that has everything that I can appreciate in a film and thats what makes it my favorite Disney film and one of my favorite films.

If yer going to reboot a thing then this is how you do it: inject the old with so many new ideas as to make it nearly unrecognisable, yet with enough of the old as to reassure true believers. A well done update is the result here.

Disney's track record of animated classics is much more on the impressive side than not. "Treasure Planet" however, teeters on the middle ground. After having a rough childhood, Jim has visit from one of the characters of his dreams, taking him on an adventure to "Treasure Planet" on a ship through space. Meeting many friends and enemies along the way, this is a very fun family adventure film. The main downfall is that is all this film strives to be. The way it began I was hoping for some deeper moments in with the characters when they were interacting with each other, but by the end of the film it felt as though the characters had come and gone just like a real dream. I am not sure if that was the intention, but it was my biggest fault with the the film. Overall, "Treasure Planet" is well-written for a kids film, the voice acting is well-cast, and the story is something that hit home while watching, but the fact that the film does;t deliver more of what the title suggests, is a bit of a letdown. I really enjoyed watching "Treasure Planet" for what it was. I believe I will enjoy it even more the second time after knowing what to expect.

Avast ye scurvy space lubbers!. I just recently watched this on Bluray (1080p), holy shit it looks good! and bare in mind this film is twelve years old now. I recall when this was released and boy was it destroyed by the critics, really panned, but I can't understand why, this is only the second time I've seen this since the cinema and I loved it. The idea of sticking this classic 18th Century set adventure into the sci-fi realm is actually a sweet one, I'm surprised it has not happened before. The whole concept really does fit the space adventurer aspect nicely but of course there are some bits n pieces that don't add up. Like why on earth would all spacecraft in the far distant unknown future be built around centuries old galleon designs by humankind? and are those ships actually made of wood??!!. Why would these ships require sails? and how come no one (mainly humans) dies from exposure to deep space? there isn't anything to protect anyone accept a gravity force field. Kinda odd seeing a young 'Hawkins' high up on the ships rope ladders with the space winds blowing through his hair. Are all buildings in this future made of wood?! can there be that much wood left? why are various alien species wearing centuries old human attire? all aliens speak the human language of English? are they actually using rope on these ships!!? ROPE! and there doesn't appear to be many humans left now I think of it...just Hawkins and his mum or so it seems. I could go on but at some point you gotta let it go, its Treasure Island in space with aliens and robots, its just suppose to be visual fun and it is by gum!. Silly absurd nonsensical plot issues aside the whole aged steampunk/historic aesthetic look is really pleasing to the eye. Some of the space sequences really do look gorgeous, a cosmic ballet indeed. Of course the film is dated which means dated CGI is evident throughout, some obvious and some not so. Its nothing too horrendous and is tolerable. Some of the best looking CGI is easily the crescent moon shaped spaceport which borders suspiciously on Mos Eisley. Where as some of the worst CGI would be the huge whale-like space creatures and the rather over the top finale on treasure planet. The characters are a fair bunch and fairly enjoyable to watch. Old 'Long John' has been crafted into a half alien half Terminator style cyborg which is curious. Sounds stupid but it actually plays out OK and looks pretty good. Jim is your standard rebellious scruff of a boy who also strangely looks familiar to 'John Connor' from 'T2', I think there is some definite influence there. The rest of the crew are satisfactory but nothing amazing, obligatory insectoid type guy, 'Star Wars Cantina' type alien, floating blob, Cat-like female, one eyed alien etc...bog standard alien designs really, possible homages I guess. I must confess to not liking Martin Short's characterisation of robot B.E.N. with his insanely loud grating voice. The way this character is portrayed as a robot gone mad is just annoying and kinda old. The kind of role you'd give to Robin Williams and his annoying crazy loudness. The only voice I did like was Murray's Irish take on Long John which does give that nice olde worlde touch, you get a good sense of the character with this, a good sense of history. There are tonnes of problems with this film that just don't add up at all, the idea of a space set pirate film works but also doesn't. I do think they just abandoned a lot of sense simply because its an animated Disney movie for kids and it simply wouldn't matter. True it doesn't matter, it is just an enjoyable fantasy romp for kids, but at the same time it would have been nice to address some of the silliness. After all everyone of all ages will watch it and while it does look awesome with some lovely creativity and imagination, the silliness sticks out like a giraffe at a polar bears only club.