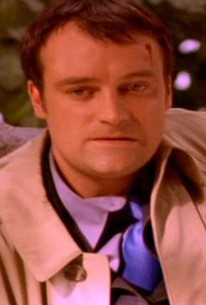 Canadian filmmaker William Phillips makes his feature debut with this psychological thriller about an ad exec, a gang of juvenile thugs, and a really big tree. Murray Roberts (David Hewlett) is an up-and-coming salesman for an advertising company who, while strolling in a city park one day, encounters a 14-year-old mugger named Carter (Kevin Duhaney). Being a life-long alpha male, Roberts refuses to play the victim and a tussle ensues. The lad's comrades in crime emerge from the surrounding trees and soon Roberts is forced to flee. He eventually finds refuge in the higher branches of a rather large tree. The gang members, led by the charismatic Shark (Clé Bennett), lay siege. A battle of wills and wits ensues between the adman and the gangster. This film was screened at the 2001 Toronto Film Festival.

There are no critic reviews yet for Treed Murray. Keep checking Rotten Tomatoes for updates!

Christ not another film about a yuppie guy trapped up in a tree by a group of young hoodloms...yawn. Indeed friends-all of you who have declared to not be interested in this film (95% of my friends list)-I just watched it for the 2nd time. It's a good movie with some great dialogue and pretty good acting by the guy in the tree. Forgive me-David Hewlett is the treed guy's name. ANYWAY this is an interesting and thought provoking film-that deals with issues of survival/good vs evil/human indifference and cruelty. There are some terrific mindgames/manipulations as Murray tries to get down from the tree without being murdered by the aforementioned young hoodloms. Give it a chance-it's Canadian eh!!

As so often happens with Canadian movies it is a metaphor social commentary drama, where a yuppie ad executive is treed by a gang of muggers and a battle of wits ensues. Interesting but doesn't really go anywhere.