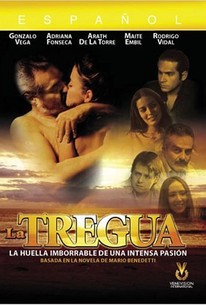 Mexican filmmaker Alfonso Priego directs the romantic drama The Truce, the second filmed adaptation of the novel by Mario Benedetti. Gonzalo Vega stars as a fiftysomething widower living in Vera Cruz with a high position in a shipping company. Just when he's thinking about retiring, he meets the conventionally attractive young secretary Laura (Adriana Fonseca). He falls in love with her and she convinces him that life is worth living. Only then is he able to connect with his college student daughter (Maité Embil), sleazy older son (Arath de la Torre), and gay younger son (Rodrigo Vidal). The Truce was shown at the 2003 Seattle Film Festival. ~ Andrea LeVasseur, Rovi

There are no critic reviews yet for La Tregua (The Truce). Keep checking Rotten Tomatoes for updates!

There are no featured reviews for La Tregua (The Truce) at this time.