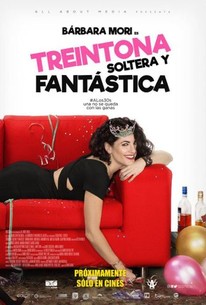 After rejecting the marriage proposal from her boyfriend tasteless, Agnes, a writer, takes his new bachelorhood to redefine itself as an independent, modern and self-sufficient woman. Although the rapid success of his "# BuscandoaInés" column in the soon reward the new Inés newspaper, its resolution is challenged by a family that considered "meeting" friends aseñoradas that no longer have room for the ladies, and especially , the ticking of their own biological clock, this is the picture to which Agnes has to learn to do the hardest thing: to hear themselves and decide what you want from your life.

A humorless film closer to a soap opera chapter than from a witty comedy. [Full review in Spanish]

Another mediocre film that follows a safe formula and is far from being remarkable. [Full review in Spanish]

A comedy with a good dose of humor and a memorable protagonist. [Full review in Spanish]

Definitely, not a revelation of what being 30 it's like, but is an entertaining film that will make you laugh and manages to send its message: there's nothing wrong about being 30 and having no idea of what to do with your life. [Full review in Spanish]

A film that ends up being complacent for women who are in the same situation as the protagonist. [Full review in Spanish]

There are no featured reviews for Treintona, Soltera y Fantástica at this time.