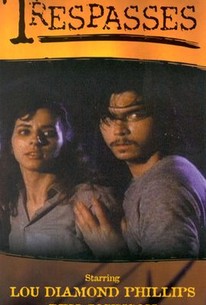 Sharon Rae (Mary Pillot) is a Texas rancher who seeks vengeance against the two drifting rapists (Adam Roarke and Lou Diamond Phillips) who attacked her while her spineless husband Richard (Van Brooks) watched. Her neighbor Franklin (Robert Kuhn) loses his son Johnny (Thom Meyer) when he is murdered trying to save Sharon Rae during the attack. When Sharon Rae's father August (Ben Johnson) dies, he leaves his bank business to her cowardly husband. Love blossoms between Sharon Rae and Franklin, and the vengeful Richard hires the rapists to poison Franklins cattle. After killing the despicable duo, Franklin goes after Richard. This routine and unbelievable feature is the last screen appearance for John Henry Faulk who became a victim of the McCarthy blacklist of the early 1950s. Faulk later wrote about his experiences during the McCarthy era.

There are no critic reviews yet for Trespasses. Keep checking Rotten Tomatoes for updates!

There are no featured reviews for Trespasses at this time.