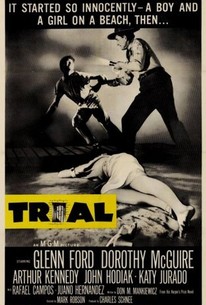 Adapted by Don M. Mankiewicz from his own novel, Trial is a surprisingly timely story of how justice can sometimes be compromised by "special interests". It all begins when Mexican youth Angelo Chavez (Rafael Campos) is placed on trial for the murder of a white teenaged girl. Battling the lynch-mob mentality in and out of the courtroom is relatively inexperienced defense attorney David Blake (Glenn Ford). Believing that anything done on behalf of his client is for the common good, Blake approves the organization of an "Angelo Chavez Society" to pay the boy's court costs and ostensibly see that justice is done in the face of small-town prejudice. Soon, however, Blake discovers that both he and his client are being used as dupes by a Communist lawyer, who hopes that Chavez will be found guilty and executed, thereby creating a martyr for the Red cause. Much was made in 1955 of the fact that the presiding judge is a black man, played by Juano Hernandez. A bit creaky at times, Trial nonetheless still packs a wallop when shown today.

Charles Evans
as Lawyer No. 1

Frank Wilcox
as Lawyer No. 2

A hard-hitting realistic drama which shows with disturbing clarity how political racketeers skilled in the black arts of showmanship can flourish under the protection of the very laws they despise.

There are no featured audience reviews yet. Click the link below to see what others say about Trial!