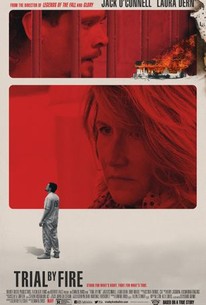 Critics Consensus: Trial by Fire has a worthy -- and heartbreaking -- story to tell, but this well-acted dramatization is undermined by its aggressively manipulative approach.

Critics Consensus: Trial by Fire has a worthy -- and heartbreaking -- story to tell, but this well-acted dramatization is undermined by its aggressively manipulative approach.

Critic Consensus: Trial by Fire has a worthy -- and heartbreaking -- story to tell, but this well-acted dramatization is undermined by its aggressively manipulative approach.

Trial by Fire is the true-life Texas story of the unlikely bond between an imprisoned death row inmate (Jack O'Connell) and a mother of two from Houston (Laura Dern) who, though facing staggering odds, fights mightily for his freedom. Cameron Todd Willingham, a poor, uneducated heavy metal devotee with a violent streak and a criminal record, is convicted of arson-related triple homicide in 1992. During his 12 years on death row, Elizabeth Gilbert, an improbable ally, uncovers questionable methods and illogical conclusions in his case, and battles with the state to expose suppressed evidence that could save him. Her efforts ultimately fail, and since Willingham's execution, the disturbing question remains: Did Texas execute an innocent man?

News & Interviews for Trial by Fire

View All Trial by Fire News

Critic Reviews for Trial by Fire

Trial by Fire... forces Willingham through a kind of poetic transformation.

Powerful stuff, but unpowerfully told, in part because the energies in "Trial by Fire" are split between proving Todd Willingham's innocence and building an argument against the death penalty no matter what the verdict.

The movie is painstakingly well made and murderously hard to sit through.

There's that masterpiece of a micro-performance by Jeff Perry, in that single scene. That alone is worth the price of admission.

O'Connell and Dern, meanwhile, find the common ground in their characters that keeps "Trial by Fire" simmering.

The film plods at points, trudging along, and there are a few misguided narrative 'devices' tacked on.

The intricate and emotional beats are played out beautifully on screen by Jack O'Connell and Laura Dern.

Trial by Fire is beautifully acted, especially by Dern, who plays a woman who is looking for purpose while also trying to raise her kids right, even though they don't always believe in what she's doing.

The performances are inspired. Laura Dern is excellent as always. It was also my personal introduction to Jack O'Connell, who is phenomenal as Cameron Todd Willingham.

The actress (Dern) brings her trademark intelligence and tenacity to the character, and the film also features strong supporting performances.

Sadly, this cinematic retelling of a truly appalling story is too often hamstrung by its predictability and overreliance on the audience's outrage at Willingham's plight.

Audience Reviews for Trial by Fire

There are no featured audience reviews yet. Click the link below to see what others say about Trial by Fire!