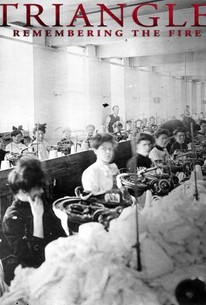 On March 25, 1911, a catastrophic fire broke out at the Triangle Waist Company in New York City. Trapped inside the upper floors of a ten-story building, 146 workers - mostly young immigrant women and teenage girls - were burned alive or forced to jump to their deaths to escape an inferno that consumed the factory in just 18 minutes. It was the worst disaster at a workplace in New York State until 9/11. The tragedy changed the course of history, paving the way for government to represent working people, not just business, for the first time, and helped an emerging American middle class to live the American Dream.

There are no critic reviews yet for Triangle: Remembering The Fire. Keep checking Rotten Tomatoes for updates!

There are no featured reviews for Triangle: Remembering The Fire at this time.