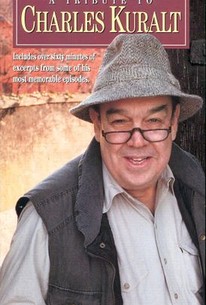 Charles Osgood honors the late journalist known to most for his On the Road TV segments that provided a look at different communities across America. In 1979, others came to know Charles Kuralt when he began appearing each weekend as the host of the tastefully presented news program Sunday Morning. Viewers of this video can discover more about the 13 seasons of Kuralt's On the Road, segments, which regularly took him "off the beaten path" in his motor home so that he could reach individuals and communities not often visited by those who just stick to the paved highways of this nation. During his career, Kuralt earned twelve Emmys and three Peabody awards for his work.

There are no critic reviews yet for Tribute to Charles Kuralt. Keep checking Rotten Tomatoes for updates!

There are no featured reviews for Tribute to Charles Kuralt at this time.