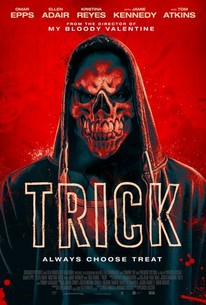 Critics Consensus: Fast-paced savagery and a memorable twist aren't enough to make up for Trick's slavish devotion to superior slasher films of the past.

Critics Consensus: Fast-paced savagery and a memorable twist aren't enough to make up for Trick's slavish devotion to superior slasher films of the past.

Critic Consensus: Fast-paced savagery and a memorable twist aren't enough to make up for Trick's slavish devotion to superior slasher films of the past.

On Halloween night in 2015, Patrick "Trick" Weaver massacred his classmates at a costume party. After being arrested, he managed to escape police custody, but not before being shot five times by Detective Mike Denver (Epps). Everyone believes Trick must be dead, but when a masked killer reappears the following Halloween, and every Halloween after that, they realize the nightmare is not over. With Trick wreaking havoc and killing innocent people in increasingly terrifying ways, Denver will stop at nothing to finish what he started and bring the carnage to an end.

leave[s] us, much like the characters in the film who attend the all-night horror-thon, worrying about just who might be sitting around us in the theatre - because, as Jayne puts it, "any one of your costumed moviegoers could be your killer".

A it's a cheesy, actionable rip-off of the John Carpenter Halloween franchise with plenty of blood and jack o'lanterns, but without a shred of originality.

One whopper of a plot-twist briefly gives "Trick" an original hook. But by the end of the picture it's clear the filmmakers aren't really interested in exploring any of the potentially interesting sociopolitical implications of their big surprise.

Sure, I was never bored, but this movie makes zero sense.

The pic might have proved mindless fun if it had least displayed a sense of humor, but everything is played with deadly seriousness.

Trick isn't much of a Halloween treat, and like a sour apple stuffed with razor blades washing the bad taste of this one out of my mouth is going to be difficult to do.

Fun without pretension and full of humor. [Full Review in Spanish]

It's messy, it's loud, it's violent. Sadly the mixture does not work this time, and Trick stays away from being a worthy 'slasher' film. [Full review in Spanish].

Trick is savage, brutal and twisted in all the best ways. It's a razor sharp, slick as hell return to form for Lussier and an absolute must see for any fan of the slasher genre.

Trick is a fun Halloween film for fans of slasher films may they be hardcore or casual; it's gleefully violent and doesn't make apologies for it.

There's potential here for a decent, coherent fright flick -but this unscary mess, whose twists are as predictable as they are illogical and unlikely, is not that movie.

It may be a terrible slasher, but at least the third act is unintentionally hilarious.

There are no featured reviews for Trick at this time.