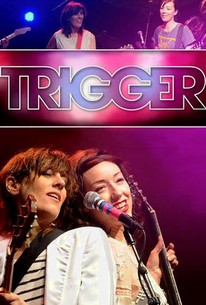 The founding members of a legendary female punk outfit are reunited years after their band imploded, and spend a long night reflecting on both their fractured friendship, as well as their moment in the spotlight in this raucous drama from director Bruce McDonald (Hard Core Logo, Pontypool). Ever since they were little girls, Victoria "Vic" Sawchyn (Tracy Wright) and Kathryn "Kat" Lake (Molly Parker) were inseparable. Eventually, Victoria and Kathryn started making music together. Dubbed Trigger, their punk-inspired band went through numerous line-up changes before hitting the perfect formula, and storming the charts. Then as quickly as success came, clashing egos and rampant excess brought it crumbling down like a house of cards. Unfortunately, Victoria and Kathryn's friendship appeared to die along with Trigger. A decade later, however, a small record label announces a benefit concert staged to celebrate women who rock. It's clear that the owners of the label expect Victoria and Kathryn to take part in the event, but when the two former friends come together over dinner both end up feeling responsible for the band's demise. Later, after the concert has ended, the two old friends prepare to attend an after-party, and the details of their turbulent relationship slowly come into focus. ~ Jason Buchanan, Rovi

A mesmerizing talk-a-thon with smart, useful things to say about life, love and rock 'n' roll.

Shot simply but compellingly, it feels like a polished and practised portrait of rekindled bonds.

Witty, moving and immensely satisfying, Trigger is a real gem, and far better than a movie so quickly slapped together has any right to be. It says a lot about what can be accomplished when filmmaking is fired with urgent devotion to a common purpose.

... you totally buy that these women have a history together and they've both been through some heavy, heavy sh*t.

No one does a rock 'n roll movie quite like [Bruce] McDonald.

...an aimless and stagy piece of work that fizzles out to an increasingly (and distressingly) demonstrable degree as it progresses.

There are no featured audience reviews yet. Click the link below to see what others say about Trigger!