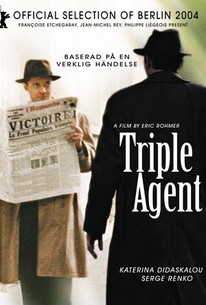 Eric Rohmer, the globally-celebrated auteur behind Claire's Knee and Ma nuit chez Maud, helms Triple Agent, a riveting political drama set in 1930s France. The story is based on the historical account of Fyodor Serge Renko, a Russian expatriate general filling the triple role of practicing espionage for the Marxists, Soviets, and Communists, and concurrently deceiving his wife Arsinoé (Katerina Didaskalou). Fyodor's life ultimately becomes entwined in the throes of deception and his life begins to unravel.

Nathalia Krougly
as The General

A treat for lovers of political (and personal) intrigue and intricate, dialogue driven stories, this is a great piece of work.

If Triple Agent is an impressive docudrama, it lacks the warmth and flow of this filmmaker's best, earlier movies.

Focusing in on Fyodor and Arsinoé, Rohmer manoeuvres the espionage theme through sitting room and bedroom, distilling the tumultuous events of 20th century history into an intimate drama about the psychology of trust and deceit.

Rohmer's dialogues are in peak form, always building in their back-and-forth volleys to spine-tingling epiphanies.

It's an undeniably dialogue-heavy film, but the performances are assured and it's shot and directed with elegant simplicity.

In some ways, it's a refreshing corrective to Rohmer's previous work, a movie about the dangers of political naiveté despite the relative comforts of art and love.

I should share one helpful tip for staying awake through the whole two-hour exercise - sit in front of someone who snores. It worked for me.

There are no featured audience reviews yet. Click the link below to see what others say about Triple Agent!