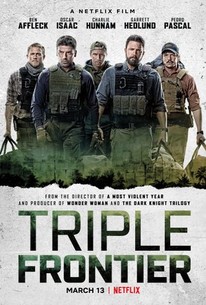 Critics Consensus: An outstanding cast and ambitious story help Triple Frontier overcome an uneven narrative -- and elevate the end result above a crowded field of grim and gritty heist thrillers.

Critics Consensus: An outstanding cast and ambitious story help Triple Frontier overcome an uneven narrative -- and elevate the end result above a crowded field of grim and gritty heist thrillers.

Critic Consensus: An outstanding cast and ambitious story help Triple Frontier overcome an uneven narrative -- and elevate the end result above a crowded field of grim and gritty heist thrillers.

A group of former Special Forces operatives (Ben Affleck, Oscar Isaac, Charlie Hunnam, Garrett Hedlund and Pedro Pascal) reunite to plan a heist in a sparsely populated multi-border zone of South America. For the first time in their prestigious careers these unsung heroes undertake this dangerous mission for self instead of country. But when events take an unexpected turn and threaten to spiral out of control, their skills, their loyalties and their morals are pushed to a breaking point in an epic battle for survival. Directed by Academy Award (R) nominee J.C. Chandor (Margin Call, All Is Lost, A Most Violent Year) and co-written by Chandor and Academy Award (R) winner Mark Boal (The Hurt Locker, Zero Dark Thirty).

With Chandor doubling as director the movie looks great but makes surprisingly little of the personal conflicts that arise.

Alas, just as broken clocks have their moments of accuracy, even the most gifted directors occasionally offer up disappointments. Such is the case with J.C. Chandor's fourth film, Triple Frontier.

Triple Frontier doesn't entirely manage to transcend the traps of action movie, but there's more to it than meets the eye.

This very good analysis of American imperialism and its devastatingly insidious effects on the individuals it ensnares into its web is frustratingly only about half of Triple Frontier.

Triple Frontier makes a decent stab at looking beyond the usual ambitions of the genre. There's thought behind all this gun-toting.

It might be a premise that's been done to death, but with a fantastic ensemble cast and a series of unexpected twists and turns - with one in particular sure to leave you shell-shocked - this one's well worth its "weight in gold."

Triple Frontier is as good a crime thriller as any movie fan could want, and one that demonstrates that Netflix is staking its claim as one of the premier movie studios.

The strong cast is able to bring enough shadings to their character types to keep our interest and a surprising third act make this a winner.

I am bored when I see the anonymous heroes punished by the mechanisms of insignificant patriotism and the wildest capitalism. [Full review in Spanish]

Triple Frontier seems to want to say some important things about the way the US simultaneously uses its soldiers to enforce its will on other nations, yet also completely fails to take care of said soldiers, especially after they've retired. But that really seems like an afterthought in a pretty baseline classic heist formula. Nobody fails Triple Frontier particularly, it just gets lost trying to pick between a brodown and a message.

Some retired Special Forces guys, hard up for cash and back in the States (moaning about how they were used and then discarded), decide on one more mission: to rob a drug dealer in South America and keep the money for themselves - "to even the score". A heist film. The first part of it is about them finding the rationale (which they already had), the second part is about their action and escape. There are scenes of tension, but the work feels uneven, disjointed. Oscar Issac delivers a decent turn. Affleck doesn't seem like he wants to get off of the couch and go outside.

Star-studded Netflix action flick that starts out slowly but once it found its footing, things get pretty exciting. Having the supposed climax of the film happen rather early on makes everything coming after that pleasantly unpredictable. Thoroughly entertaining and with interesting characters, the viewer is gladly on board for the ride. Some parts play out maybe a tad too quickly, but overall the experience is pretty satisfying and even calls for a sequel.

Netflix seems to be the way to go when a big studio doesn't bid on your film for theatrical release, but it is always interesting when watching a film on Netflix that clearly deserved to be seen by a larger audience on the big screen. While the core premise of Triple Frontier isn't all that unique or original, a good film is a good film, regardless of the tired story it's telling. Personally, a good heist story always impresses me, so I was looking forward to this one in general. I'm pleased to say that this is a very, very solid film and here's why it deserves more attention. Following a group of five retired Special Forces soldiers, Triple Frontier explores how their lives have become boring and that they are all still wishing for the hole that the action in their lives has left them. When confronted with the opportunity to travel to South America to steal millions of dollars from a drug lord, there's hardly any hesitation, as they feel the money could greatly benefit their families and their livelihood in general. Without giving too much away, not much of this story plays out in their favour, which makes for a gripping experience from start to finish. As aforementioned, I really do believe the formula of this film has been done countless times in the past, but Triple Frontier embraces that and delivers on some very fleshed out characters and a way of telling the overall story that had me on the edge of my seat. From the always great Oscar Isaac as the leading man to the very likeable performance that Ben Affleck always seems to give, to the downright career-altering turns in both Charlie Hunnam and Garrett Hedlund, everyone is giving their all here, and not the least of which is Pedro Pascal, who always seems to receive the short end of the stick when it comes to Hollywood films. His talent far exceeds the limited dialogue he's given here. Where this film truly shines is in the way it plays out. There are surprises throughout every act and there is one moment in the film that should've been expected, but ended up having my jaw on the floor, due to the fact that I honestly didn't think Triple Frontier was going to be the gutsy film it becomes throughout the third act. Whether being disgusted by the actions of the lead characters or simply just enjoying their banter on the surface of it all, I had a very enjoyable time watching this one. In the end, Triple Frontier begins as a generic film that re-forms the bond that their friendships once had, but ultimately evolves into a visceral survival flick that takes a couple turns that I wasn't expecting. Although familiar in terms of storytelling, I highly recommend this movie to fans of a good heist flick or those who enjoy any of these actors, because they're all bringing it here. Triple Frontier was a very, very good movie in my eyes and should've been given a theatrical release. It's now streaming on Netflix.