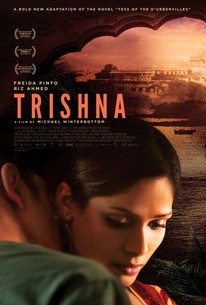 Based on Thomas Hardy's classic novel Tess of the D'Ubervilles, master filmmaker Michael Winterbottom's newest film stars Frieda Pinto who soars as Trishna in her most revealing performance yet. Trishna lives with her family in a village in Rajasthan, India's largest state. As the eldest daughter, she works in a nearby resort to help pay the bills. Jay (Riz Ahmed) is the wealthy son of a property developer. When he takes up managing a resort at his father's request, he meets Trishna at a dance and their fates cross. Jay finds every opportunity to win Trishna's affection and she accepts his efforts with shy curiosity. But when the two move to Mumbai and become a couple, Jay's deep family bond threaten the young lovers' bliss. -- (C) IFC

Trishna engages the potent collisions of the rural and the urban, the poor and the rich, and considers how these interactions unfold in a romance and how they might also destroy it.

Winterbottom has complete control of the film's look and feel, but the story seems to run away from him.

A rare unsatisfying swerve from an otherwise reliably provocative career.

"Trishna" works largely on the strength of Winterbottom's clever updates of a century-old story.

A loose but nonetheless pretty faithful recasting of Hardy's penultimate tragedy, Tess of the d'Urbervilles.

Winterbottom gives a bright panorama of Indian life, from the agrarian countryside to the tumult of Jaipur and the sophistication of Mumbai.

With Trishna, Winterbottom digs deep into his characters' humanity, and comes back with gold.

Tess was very much a novel of its time. Those times have changed -- though, as Winterbottom does manage to show here, not as much as we think.

The cast bring an easy naturalistic style to their performances, softening some of the more melodramatic elements of the plot, with Winterbottom's camera eager to capture the colours, multiple identities and complexities of modern day India.

Trishna may be alluring and striking to look at, but the lack of purpose and floundering performances by Ahmed and Pinto ends up leaving you cold.

Alec d'Urberville, the wayward idler who seduces Tess, and Angel Clare, the compulsively virtuous youngman she loves, 'the earnestest man in Wessex', have been distilled [in this adaptation] into a single, somewhat problematic figure.

It takes a while to figure out what Winterbottom wants to say with what appears to be a conventional love story set in India, but soon the film proves to be more ironic, intense and emotionally draining than it seemed at first - with a very surprising third act.

Decent movie. Not so much like Thomas Hardy's classic novel Tess of the D'Ubervilles, of which this was supposed to be loosely based. Very loosely. Freida Pinto is very beautiful, and a decent actress. This movie just seemed to drag on, and on.

A lower class woman falls for an upper class man. This is how class-conscious love stories should be done. Class becomes palpable and real, and the sacrifices that each lover must undertake in order to make the match work ring true and compelling. Rather than falling into the trap of being generalized, Jay must at times give up aspects of his livelihood for Trishna, who later becomes so engrossed in the relationship that what she gives up becomes stomach-curdling and ultimately tragic. Michael Winterbottom fashions a film out of such short scenes, and he does so expertly, able to compact huge spaces of time and dramatic jumps of character. However, I did not like the end, which seemed to wrap things up too neatly. Overall, this is very strong film, and it's fitting because British and Indian filmmakers are more attuned to the ravages of class difference than we are.