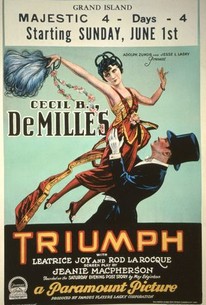 After the spectacular epic The Ten Commandments, filmmaker Cecil B. DeMille returns to the drawing room for this pleasingly straightforward drama. King Garnet (Rod La Rocque) is the idle son of factory owner David Garnet (George Fawcett). He is in love with Ann Land (Leatrice Joy), the factory's forewoman, but she turns down his proposal of marriage because she has aspirations to be a singer. When old man Garnet dies, he wills his son the company, providing that he settles down within two years; failing that, it goes to William Silver (Victor Varconi), the factory's manager and King's half-brother via a secret marriage. Two years pass and Garnet is a bum sleeping on park benches, so Silver inherits the company. His new position in life changes him -- where he was once a radical in favor of the workers, he now becomes a snob. Meanwhile, Ann has achieved her dream and become an opera star in Europe, but smoke from a theater fire destroys her vocal chords. She returns to the factory, where Silver courts her. King picks himself up, goes to work at the factory as an employee and works his way up to manager. Silver is the pawn of a group of schemers, and King helps him straighten things out. He is glad to hand over the company to King, who also wins Ann. The good notices this film received prove that DeMille was still capable -- when he wanted -- of making an entertaining film without resorting to a lot of flash.

Jimmie Adams
as A Painter

Raymond Hatton
as A Tramp

Zasu Pitts
as A Factory Girl

Alma Bennett
as The Flower Girl

It never bores you. Mr. Varconi does some capable work, assisted by such reliable actors as Robert Edeson and Charles Ogle.

In spite of its essential foolishness, [De Mille] has made it seem credible (in spots) and interesting (at all times) by his expert manipulation of scenes and people.

In extraordinary photoplay that be recommended to every member of any household as clean and worthy entertainment free from vulgarity or suggestiveness.

There are no featured reviews for Triumph at this time.