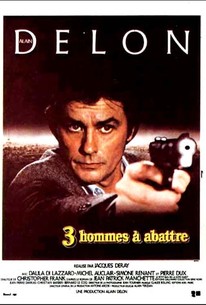 Michel Gerfaut (Alain Delon) makes his living playing poker. But when he stops to help an injured motorist on the side of the road one night, he unwittingly gets involved in a sinister arms deal cover-up. The capable Gerfaut goes on holiday, bringing his longtime girlfriend, Béa (Dalila Di Lazzaro), to Trouville to meet his mother (Simone Renant). He soon finds himself the target of killers hired by the pompous Emmerich (Pierre Dux) and his ruthless underling, Leprince (Michel Auclair), who suspect he's working for their competitors. Gerfaut unsuccessfully tries to get help from a policeman friend, but the police are tied in with the crooked military aeronautics company. Backed into a corner, Gerfaut strikes back against his attackers, eventually taking the fight right to Emmerich's doorstep. Three Men to Kill, based on the well-regarded novel by Jean-Patrick Manchette, was directed by Jacques Deray, who also co-wrote the script with frequent collaborator (Borsalino et al) Delon, who also produced, and Christopher Frank. Delon and Frank later adapted Manchette's Pour la peau d'un flic for the actor's directorial debut. ~ Josh Ralske, Rovi

There are no critic reviews yet for Trois Hommes à Abattre (Three Men to Destroy) (Three Men to Kill). Keep checking Rotten Tomatoes for updates!

I got right into these French cop thrillers early on...Delon was a great actor and even though French I still enjoyed them a lot.

A French Film from 1980 Era. This one is part of the 20 Film Collection in the Grindhouse Experience. Better know as Three Men to Kill. Mr. Michel Gerfaut is just trying to be a nice guy when he stops to help someone who had a car accident. Ah Ah Ah sorry but this guy also has a bullet hole in him, this starts a landside of how bad can things get. People keep trying to kill him. Whats up with the Grindhouse Experience, my copy abou 3/4 way into the film started rolling adn then you could tell it was a dub of a VHS tape and the player had dirty heads. Come on Fortune 5 don't you QA your products. Maybe better if you can find a single DVD Copy. Dalila Di Lazzaro (His Girlfriend) is a Bomb. As pretty as they get, wish I met her back in the 80ties.