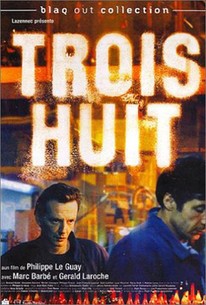 One man's desire to better himself and improve his family's station in life has dire and unexpected consequences in this realistic thriller. Pierre (Gerald Laroche) is a worker in a glass factory whose small stature and quiet demeanor do not disguise the fact that he wants his wife Carole (Luce Mouchel) and son Victor (Bastien Le Roy) to have the good things in life, and he's not afraid to work hard to get them. When Pierre learns that a position is open on the plant's night shift that would pay better, he requests to be transferred, but he soon discovers that the late-shift staff is a different breed than the co-workers he's used to -- especially Fred (Marc Barbe), a large and arrogant man who alternately glad-hands Pierre for his friendship and treats him with contempt. Pierre takes great pains to be civil with Fred, but when Pierre gets a promotion and Fred does not, Fred explodes with rage, and the two find themselves in a vicious argument that stops just short of a fist fight. Before long, Pierre finds himself back in Fred's good graces, and the other workers are friendlier with him, even offering to help Pierre with a home improvement project. But in time Pierre discovers that what looks like friendship is actually part of a sinister and carefully orchestrated attempt on Fred's part to get revenge. ~ Mark Deming, Rovi

There are no featured reviews for Trois Huit (Nightshift) at this time.