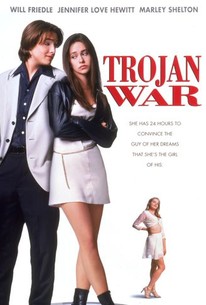 In this randier-than-usual teen comedy, Brad (Will Friedle) is madly in love with Brooke (Marley Shelton), but she happens to have a boyfriend who is a star on the school football team. Brad's best friend Leah (Jennifer Love Hewitt) doesn't think much of Brooke or Brad's interest in her, but this is largely because she's secretly in love with him and wishes he felt the same way. Brooke is having problems with her boyfriend and decides she wants to make him jealous, so while Brad and Brooke are studying together, she tells him she'd be more than happy to have sex with him that night. Good news for Brad, but there's one small problem -- Brad doesn't happen to have any condoms, and as the evening wears on, he has a harder time finding some protection than any man since the dawn of time. Leah, of course, is heartbroken -- as much as she wants Brad to get what he wants, she knows that Brooke is merely using him, and would never give him the love she feels for him. Trojan War was also shown under the title Rescue Me.

Will Friedle
as Brad

Thomas Rees
as Bartender
View All

There are no critic reviews yet for Trojan War. Keep checking Rotten Tomatoes for updates!

"Trojan War" is a teen movie from the '90s about a high school senior's chance with the most sought after girl in class which turns into a crazy all out search for a condom (yes, that's what "Trojan" in the title refers) to have sex with the girl of his dreams. Meanwhile his best friend is in love with him but it takes him the whole movie to realize that his gal pal is the better choice. Along the way he has misadventures with the cops led by Lee Majors after his parent's car is stolen, and Anthony Michael Hall as a psychotic bus driver who really hates passengers that board his bus without exact change.