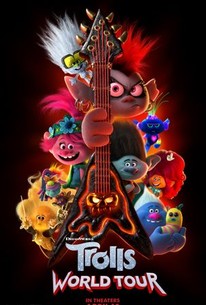 Anna Kendrick and Justin Timberlake return in an all-star sequel to DreamWorks Animation's 2016 musical hit: Trolls World Tour. In an adventure that will take them well beyond what they've known before, Poppy (Kendrick) and Branch (Timberlake) discover that they are but one of six different Troll tribes scattered over six different lands and devoted to six different kinds of music: Funk, Country, Techno, Classical, Pop and Rock. Their world is about to get a lot bigger and a whole lot louder. A member of hard-rock royalty, Queen Barb (Rachel Bloom), aided by her father King Thrash (Ozzy Osbourne), wants to destroy all other kinds of music to let rock reign supreme. With the fate of the world at stake, Poppy and Branch, along with their friends - Biggie (James Corden), Chenille (Caroline Hjelt), Satin (Aino Jawo), Cooper (Ron Funches) and Guy Diamond (Kunal Nayyar) - set out to visit all the other lands to unify the Trolls in harmony against Barb, who's looking to upstage them all.

Chance the Rapper
as Chance

Soo-young Park
as Ari
View All

Breakdown of 2020 Movie Delays, and When They Will Hit Theaters
The 37 Most Anticipated Movies of 2020
Trolls World Tour, Ip Man 4, and Gretel & Hansel Hit Digital Release This Week

The songs are kinda boring and the plot's pretty rote, but this film is shockingly beautiful and thought-through in all the design elements.

Even with so much spelled out, the significance of this very abstract parable will be best appreciated by the adults in the room, just as the trippy visuals (often quite imaginative) belong to the same tradition of knowingly warped storybook imagery.

Trolls World Tour is clear on one thing: never should glitter and rainbows be automatically equated with brainlessness.

One of the nicest things to say about Trolls World Tour is that it moves pretty briskly. It's not particularly impactful, but it should be entertaining enough for young viewers.

I don't know if a six-year-old -- who the animation appears designed for in terms of style, brightness, and color -- would get any of the jokes, but as a person trapped in my house, I appreciated them.

"Trolls: World Tour" is not a mindblowing cinematic achievement, but it is exactly what kids, and parents, need right now. That's where it hits the high note.

A strange, fun and layered elegy to music.

...a journey well-trodden, but nonetheless elevated by tight visuals, high-energy, and good vibes that make for some easy-breezy viewing.

Trolls World Tour is nowhere near the quality of the first film, with fleeting fun attached to mostly forgettable songs.

What's missing is the wonderful weirdness that made the original Trolls film the strangest children's entertainment since H.R. Pufnstuf. Story wise, this one feels formulaic with less of an edge.

It's still a film aimed at very young kids and can be annoyingly twee at times, but there's a sense of spectacle and cleverness here that was rarely present in its predecessor.

There are no featured reviews for Trolls World Tour at this time.