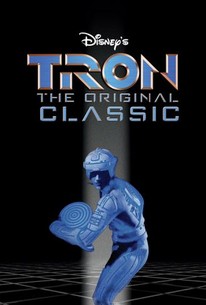 Critics Consensus: Though perhaps not as strong dramatically as it is technologically, TRON is an original and visually stunning piece of science fiction that represents a landmark work in the history of computer animation.

Critics Consensus: Though perhaps not as strong dramatically as it is technologically, TRON is an original and visually stunning piece of science fiction that represents a landmark work in the history of computer animation.

Critic Consensus: Though perhaps not as strong dramatically as it is technologically, TRON is an original and visually stunning piece of science fiction that represents a landmark work in the history of computer animation.

A computer programmer is trapped in the game he's creating.

Rick Feck
as Boys in Arcade

John Kenworthy
as Boys in Arcade
View All

Director Steven Lisberger treats his actors like props, which is understandable when one considers how technically oriented the project is.

For most people, TRON's importance is as a historical footnote. It's the Model T of our CGI age. But the film's fans are passionate ones.

Without the rosy filter of nostalgia, it's a virtually unwatchable virtual-reality saga.

It's a simple idea that ought to serve, but Lisberger's failures of pacing, structure, variation, and characterization ultimately make the film seem monotonous and distant.

Tron is loaded with visual delights but falls way short of the mark in story and viewer involvement.

Tron never reaches a level of excitement commensurate with its effects budget.

What's so special about effects that service the same illusion as cosmetics on a corpse? No matter how hard it tries to look like it, this picture has no life in it.

The first part of the movie makes very little sense, throwing jumbled gobs of jargon at the viewer in the hopes that they'll just accept the overload of information.

Although Tron, with all its jazzy computer-generated imagery, is intermittently fascinating to look at, it's a pretty poor excuse for a movie.

TRON is a sci-fi action adventure that delivers on a promise of being something you've never seen before.

I am increasingly fascinated by what was achieved with such limited means. [Full Review in Spanish]

Tron, simply and purely, is one of the most original movies of all time -- a genuine Fantasia for the 80s.

The dazzling visuals may have been a unique experience when this film came out, boasting highly advanced computerized effects for the 1980s, but nothing saves the script from being a ridiculous, tiresome mess with an uninteresting shred of story that is painful to sit through.

A gifted but rebellious computer programmer is digitised and sent into the heart of a computer system where software is personified and exists within a landscape ruled with an iron fist by a dictator called the Master Control Program. Tron was Disney's attempt to jump on the bandwagon of cinematic science fiction made popular by Star Wars and the burgeoning interest in computers and video games. It borrows heavily from contemporary films including Flash Gordon and Star Trek as well as George Lucas' franchise but its real draw at the time was its cutting edge special effects that represented the digital landscape. As you can imagine, they have dated a lot since its release but beauty is of course in the eye of the beholder, so to some they will be old and cheesy but to others the height of retro chic. I personally have always had a soft spot for vector graphics and so quite like the look of the film still, despite the quality of the green screening which inevitably looks very shoddy by today's standards. Some of the dialogue is also very corny in the way that ageing script writers trying to be "down with the kids" always is and the action is a little pedestrian, but the premise really captures the imagination and its endearingly naive approach conjures up a lot of nostalgia in the way a lot of 80s sci-fi films do. Plus it clearly had an impact on the Wachowskis who borrowed a lot of its ideas for The Matrix.

I loved this movie when I was a kid in the early 1980s. Having seen it again as an adult, it's pretty stupid. But I guess it captures the wonder and imagination abounding when personal computing and video games were new. Interesting as an historical time capsule.