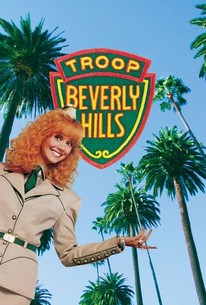 Shelly Long stars in this comedy as a spoiled Beverly Hills wife who decides--wanting to prove her husband's accusation of her selfishness wrong--to become the leader of her daughter's wilderness group. Though taking them on outings at the mall rather than in the woods, she later must prove her worth as a legitimate troop leader. After some zany incidents, all parties learn lessons of teamwork and selflessness

Eloise Broady
as Starlet at Party

William A. Wallace
as Officer Bill

Frankie Avalon
as Himself

George Christy
as Himself

Annette Funicello
as Herself

Robin Leach
as Himself

Cheech Marin
as Himself

Ted McGinley
as Himself

Flo di Re
as Wilderness Official

"Troop Beverly Hills" is based on the real experiences of its producer Ava Fries, but it doesn't pay the kind of detailed attention to the Beverly Hills girls Fries must have known to make the movie work.

For about a half-hour, "Troop Beverly Hills" brings a lot of funny situations and funny lines. Then it's time to finish the popcorn and settle down for a nap.

Screenwriters Pamela Norris and Margaret Grieco Oberman hail from the mid-1980s period of Saturday Night Live, if that gives an idea of what to expect in the way of a script.

Long is an actress who can't throw away a line--though this is one case where she should have thrown away the whole script.

Long strives coyly and cutely to become a Lucille Ball of the opulent '80s. But despite her winsome presence, "Troop Beverly Hills" proves an uphill, downhill trek.

Troop Beverly Hills relies on contrived situations and caricatures for its humor.

Even relieved by the occasional witty line, delivered impeccably by Long, the thing is still an empty, old-fashioned, worn-out rag of a situation comedy.

A misunderstood camp classic. The costumes alone deserve an oscar not to mention Shelley Long's performance

It's cookie time! This childhood favorite stands the test of time with a fabulous performance by Shelly Long, iconic costumes, and a lot of heart!

Troop Beverly Hills thoughtfully exposes the complexities of divorce, social/class culture and personal growth in a light comedy very much loyal to its time.

actually entertaining, i was suprised i liked it

When the going gets tough, the tough go shopping!

A fun comedy with a dimwitted rich lady leading a troop of girlscouts through the wilderness of Beverly Hills, and then into the wild itself. The comic situations depicted are successful.

Not a bad comedy with Shelley Long as a stinking-rich Beverly Hills housewife takes her daughter's troop of obnoxious girl guides off on a caring, sharing trip.