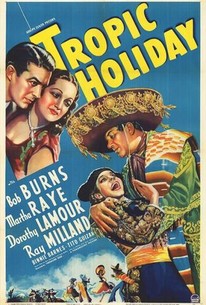 Dorothy Lamour and Ray Milland, a popular Paramount screen team specializing in south-sea extravaganzas, don "civilized" garb (at least briefly) for Tropic Holiday. Lamour plays a Mexican senorita, while Milland is a visiting American screenwriter. Since we know where this is going, our attention is deflected every so often by comedy relief Bob "Bazooka" Burns and Martha Raye, who are frankly more watchable than the leads. Also on hand is Mexican musical star Tito Guizar, who was still packing 'em in for his concert tours of the 1980s. Tropic Holiday contrives to remove most of Dorothy Lamour's clothing before the fade-out, just so we remember who's top billed around here.

Dorothy White
as Dancer
View All

Martha Raye in a bull-fight and the singing of Tito Guizar are about the only things worth mentioning about the much-publicized Tropic Holiday.

There are no featured reviews for Tropic Holiday at this time.