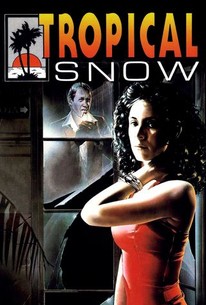 Funny how neither David Carradine nor Madeleine Stowe list Tropical Snow on their resumes. The title refers to the Colombian drug trade, which looms large in the film's climactic scenes. Madeleine and Nick Cori play Maria and Tavo, a South American couple who can't seem to make an honest living. Drifting into crime, Maria and Tavo attempt to become pickpockets. When this fails, they tie up with drug kingpin Oskar (Carradine). From this point on, a tragic denouement is a "done deal". Filmed largely on location, Tropical Snow is, at the very least, energetic.

There are no critic reviews yet for Tropical Snow (Nieve tropical). Keep checking Rotten Tomatoes for updates!

There are no featured reviews for Tropical Snow (Nieve tropical) at this time.