Trouble Along the Way1953 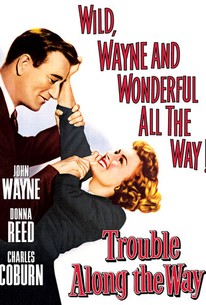 Trouble Along the Way Photos

"Winning isn't everything -- it's the only thing." These words were spoken not by Green Bay Packers coach Vince Lombardi but by Steve Williams, the fictional college athletics instructor played by John Wayne in Trouble Along the Way. Recently divorced, Williams has trouble finding a job due to his inability to get along with his superiors. If he doesn't find work soon, he'll lose custody of his daughter Carole (Sherry Jackson). Meanwhile, St. Anthony's College, heavily in debt, may have to close its doors. Father Burke, rector of St. Anthony's, reasons that the school could get back on its feet if it had a winning football team, thereby securing the support of the alumni. Thus, against his better judgment, Father Burke hires the troublesome Steve Williams, who'll stop at nothing to assemble a winning team. Somehow, Williams has to turn into a regular human being, and that's where social worker Alice Singleton (Donna Reed) comes in. More sentimental than most Wayne vehicles, Trouble Along the Way is well worth the ride. ~ Hal Erickson, Rovi

Critic Reviews for Trouble Along the Way

...much of the dialogue is clever, and old Charles Coburn is delightful as a priest.

A minor serio comedy in the vast output of director Michael Curtiz and in the distinguished career of John Wayne, who's cast against type.

It's the kind of pic you expect Pat O'Brien to be in.

Audience Reviews for Trouble Along the Way

Very nice heart warming drama sport film with John Wayne. This is my first time I watched the 50s college football ever put on the screen. Wayne and Donna Reed have good chemistry. But Wayne's scenes with little Sherry Jackson are something special.

Trouble Along the Way Quotes