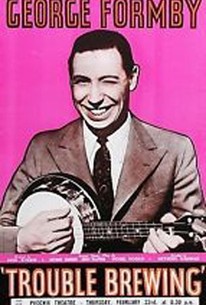 Most of British regional comedian George Formby's vehicles were released in the US through Columbia Pictures; somehow Trouble Brewing slipped through the cracks. Bucktoothed Formby plays a newspaper printer who wins big at the racetrack. Unfortunately he is paid off in counterfeit bills. To avoid the long arm of the law, Formby sets about collaring the crooks himself. The trail leads inexorably (and hilariously) to Formby's own boss. George Formby's leading lady in Trouble Brewing was the gloriously named Googie Withers, later a major British film actress specializing in murder melodramas.

There are no critic reviews yet for Trouble Brewing. Keep checking Rotten Tomatoes for updates!

There are no featured reviews for Trouble Brewing at this time.