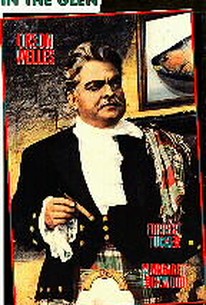 Trouble in the Glen Photos

Trouble in the Glen was one of several felicitous collaborations between Hollywood's Republic Pictures and England's Herbert Wilcox-Anna Neagle productions. Curiously, Ms. Neagle does not appear--just as well, since the film is dominated by Orson Welles. Introducing himself with a typically self-indulgent monologue, the porcine Mr. Welles plays a South American resident who returns to his ancestral home in Scotland to become "Laird of the Glen". He immediately alienates the local populace by closing down the highway that runs through his estate. Hoping to make peace between Welles and the locals is former US air force officer Forrest Tucker, who developed an affection for the community while being stationed there during WWII. Violence threatens to erupt when evicted tinker Victor McLaglen rounds up a gang of toughs to lay siege on Welles' castle. The scenes involving Tucker's polio-crippled daughter (Margaret McCourt) run the risk of sloppy sentiment, but are deftly handled by producer-director Wilcox. Margaret Lockwood costars as Welles' daughter, who adheres to Hollywood formula by falling in love with the handsome Tucker. ~ Hal Erickson, Rovi

Critic Reviews for Trouble in the Glen

There are no critic reviews yet for Trouble in the Glen. Keep checking Rotten Tomatoes for updates!

There are no featured reviews for Trouble in the Glen at this time.

Trouble in the Glen Quotes