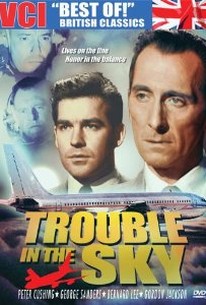 Trouble In The Sky Photos

Captain Gort (Bernard Lee) is an airline pilot who must answer to a Court of Inquiry after the crash of a Phoenix jet. Although he passes a battery of tests, pilot error is the determined cause of the accident. Sir Hobbes (George Sanders) is the Queen's council whose relentless prosecution helps blame Gort. When a second crash occurs, Gort is defended by Captain Judd (Peter Cushing), who is convinced that mechanical malfunctions, not the pilot, caused both crashes. ~ Dan Pavlides, Rovi

Critic Reviews for Trouble In The Sky

The story is inspired by true events in the 1950s.

There are no featured reviews for Trouble In The Sky at this time.

Trouble In The Sky Quotes