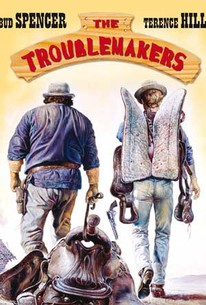 Two bounty-hunting brothers attempt to patch up their considerable differences in accordance with their mother's desire that the family reunite for the holidays. The main difference between the brothers is that one specializes in freeing wanted criminals for a hefty price, while the other tries to round them up in order to support his large family. The two team up to capture the same crook, but somehow they end up mistaken for bad guys themselves during a bank robbery. Veterans of spaghetti westerns, actors Terence Hill and Bud Spencer direct and star in this uneven parody of the lucrative genre.

Sommer Betsworth
as Girl
View All

There are no critic reviews yet for Troublemakers. Keep checking Rotten Tomatoes for updates!

There are no featured reviews for Troublemakers at this time.