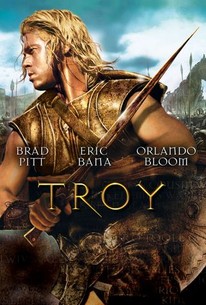 Homer's sprawling tale of love and war in ancient Greece comes to the screen in all its grandeur in this epic-scale adventure. In 1193 B.C., Paris, Prince of Troy (Orlando Bloom), has fallen in love; however, the beautiful woman who has beguiled him is Helen, Queen of Sparta (Diane Kruger), who is wed to King Menelaus (Brendan Gleeson). While Helen is hardly immune to Paris' charms, this doesn't blunt Menelaus' fury when Paris steals her away from him. Menelaus' brother Agamemnon (Brian Cox), the power-hungry king of the Mycenaeans, is eager to expand his empire through Troy to the lands of the Aegean Sea, and he uses Paris' romantic slight against Menelaus as an excuse to wage an all-out war against the great walled city. Priam, King of Troy (Peter O'Toole), summons his armies, led by Prince Hector (Eric Bana), to meet the onslaught of Agamemnon's forces, but while the great city has yet to yield in a battle, Agamemnon has a formidable ally -- Achilles (Brad Pitt), a mighty and seemingly unstoppable warrior whose presence could tip the scales in Agamemnon's favor. Sean Bean, Julie Christie, Saffron Burrows, and Rose Byrne highlight the film's supporting cast. ~ Mark Deming, Rovi

Brad is worth the ticket price alone and others turned in creditable performances, particularly Eric Bana as an upright family man who just happens to be the prince of a warlike city-state, and Sean Bean as Odysseus the Ironic.

Violent, watered-down version of The Iliad.

'A valiant but doomed affair, as carefully constructed -- and ultimately as hollow -- as the Trojan Horse itself.'

Wooden horse, wooden acting, wouldn't bother if I were you.

Bruising battles and some stirring performances make Troy enjoyable, if rather long.

Petersen puts an effects-generated, action-film spin on the Trojan War, focusing on spectacle rather than emotional nuance. While this undermines acting opportunities by downplaying personalities, it works on a popcorn entertainment level.

With all the over-the-top costumes and sets, it looks more like a television movie of the week than a big summer event flick.

The real problem with Petersen and Benioff's reductive ideological updating of the epic story they tell is organic, not pedantic: the "realism" they've opted for goes against the grain of the genre they're working in.

An adaptation of The Iliad that would have had to work much harder to miss the point of The Iliad any more thoroughly.

While an achievement in visuals, Troy fails in every other aspect including its writing and storytelling.

Homer's The Iliad is the basis of this film and whether or not the actual Trojan War took place this film actually does the story/fable/myth great justice with its glorious lavish looks. For me the mystery behind this ancient Greek plot is all the more intriguing and boosts my favour for the film. From what I see and have read Petersen's film is quite accurate to what we know of the event, everything seems to play out as it should and there doesn't appear to be much Hollywood tomfoolery going on with the details, well not too much. One Slight argument could be raised about a minor detail, Achilles relationship to Patroclus is not known for sure, where as here they are cousins. As for some other bigger issues...King Agamemnon wasn't killed in Troy but returned to Greece, Paris did actually die in Troy during the war and Helen of Troy was suppose to have been taken back to Sparta. So a little artistic license used it seems but not too bad, why it was done that way I don't know. As for the film...well it looks gorgeous, the location work really sets this up beautifully as everything looks a soft sandy golden colour against the piercing blue Aegean Sea although not actually filmed against the Aegean Sea. The Walls of Troy are powerful and impressive looking as the Greeks attack them throughout, the battles are huge with vast channels of warriors facing off against the city walls and each other, some excellent battle sequences I assure you. The scope of the battles is probably the best aspect of the film really, a lot of historical films have good battles in them these days but you really get a sense of size here plus its all in broad daylight so its gotta look sharp. The visuals, the costumes (LOVE that dark coloured Myrmidon armour, very striking, very cool), the sets and the battles can't be faulted but unfortunately one thing lets all this down badly and that's the casting. Pretty much every member of the cast is a bad choice and doesn't fit the bill at all, harsh but true. Brian Cox as Agamemnon is far too much of a villain in the film and hams it up atrociously...you'd think he was in the next ''Die Hard' flick! Gleeson looks the part but his Irishness keeps coming through, he's in the wrong time period and army. Pitt simply can't act too well I'm afraid, always his major downfall, plus he looks too buff and pretty for the part really which takes away any sense of realism. Yep Pitt looks too good, too super heroic for his own good. Bana really puts in a poor show here for some reason, I just didn't feel the power he should have, the emotion just wasn't there plus his Aussie accent kept creeping in. The same for Bean with his Yorkshire accent which isn't covered at all!! so you have King Odysseus with a Sheffield South Yorkshire accent for Christ's sake! Then you have the very weak talented Bloom who somehow manages to keep getting cast in big films, yes he looks perfect for this role but he simply can't handle the weight of this type of epic film. Lastly we have the mighty Peter O' Toole who again like other cast members just doesn't seem to have the power or weight needed for the role, he came across as tired and almost reluctant to embrace the role, a stunning actor for sure but he didn't seem right here. Its a damn fine film to take on Homers ancient poem but I just wish Petersen had used a cast that wasn't simply chosen for their big name status at the time. I would of thought he had more sense than that and as a result he lets down this film which could of been truly epic in every aspect. Its definitely a visually spectacular war movie that's for sure, very pretty looking ancient battle porn, but methinks that's all it really is.

Based on Homer's The Iliad, one of the most famous tale's ever told, Troy has all the usual Hollywood epic ingredients; an American hero with bulging biceps sporting an odd accent, a supporting cast of British character actors who routinely show him up (especially Peter O'Toole who brings some real humanity to his somewhat underwritten role) and a soundtrack of the usual faux-folk warbling and penny whistles that seem to mean "ye olden days" to US audiences. Brian Cox is actually pretty good fun as the megalomaniacal king and Orlando Bloom's fresh faced vulnerability that I find usually compromises him in leading roles actually works to his advantage here. To be honest, all the characters are really just stereotypical "heroes" with little insight or depth but it has a sense of spectacle that reminded me of the similar old school historical adventures that pleasantly pass rainy Sunday afternoons. The fact is your enjoyment of this film is entirely dependent on whether or not you can swallow Brad Pitt as an ancient Greek hero and I have to say as ridiculous a casting choice it was, he does bring a hell of a lot of presence to the screen. It's no Gladiator, but compared to dim-witted trash like Clash Of The Titans it's a masterpiece.

Troy is loved by the public, and I respect that, but as a film lover I did not find it as entertaining as everyone else. The storyline was boring in my opinion and easily forgettable. The cast was a bunch of actors girls can sweat for and thats pretty much it. The action scenes are great, i will admit that, much just action doesn't make a good film. Troy can be loved by everyone for all I care, I just did not like it very much.

Oklahoman Brad Pitt as Greek war hero? I didn't want to believe it, but given the medium he does quite well in this famous story done Hollywood style. O'Toole adds gravitas, Bana com-Pitt-tition (muscle for muscle), Cox is nicely disagreeable, Gleeson unrecognizable under a beard, and a splendid time is guaranteed for all. For once, too, I did not need my Cliff Notes to know how it would end.