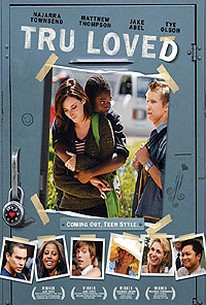 Uprooted from her comfortable San Francisco home and transplanted to a generic Southern California suburb by her two well-meaning moms, open-minded high-school sophomore Tru despairs at being surrounded by close-minded football players and air-headed Paris Hilton wannabes until she gets the idea to combat small-town intolerance by co-founding a local chapter of the Gay-Straight Alliance. Life in her new town isn't easy, so in order to fend off boredom, Tru frequently escapes into fantasy. But whether she's retreating into a picture-perfect, Leave It to Beaver-style household with two mothers and two fathers or dancing in the streets West Side Story-style, Tru's depressive new surroundings always remain the same once she's snapped back to reality. When the star quarterback at her new high school begins paying special attention to Tru, her initial elation is soon tempered by the revelation that he's actually just another closet case in search of a sympathetic shoulder to cry on. Though Tru is at first frustrated by the prospect of putting on a false front in order to protect the athlete's true sexuality, she decides to address the homophobic attitudes of her new classmates directly by opening a local chapter of the Gay-Straight Alliance. As the movement begins to gain steam, however, Tru is forced to reconcile her unguarded position on sexual orientation with the private pledge she has made to her closeted classmate.

David Kopay
as Himself

The world is not quite as nicely rainbow-hued as the film wishes it were at the end, but, if nothing else, Tru Loved makes us hope all the more that it can be one day.

This plodding plea for tolerance would barely pass muster as an after-school special.

Too bad it's not better, because in many ways it's a coming-out movie with a difference.

Content, bolstered by some solid performances, triumphs over form: The film is engaging, timely and courageous.

Worthless drivel for the gay-lesbian market.

A beautiful story, memorable performances, an eloquent message and heartfelt humor, Tru Loved is a film that you will truly love.

The movie is crummy on several levels, yet its desire to help make the world more loving and tolerant is so pure-hearted that criticizing it seems almost mean-spirited.

Wade's extremely low budget film is hampered by badly recorded dialogue and a script that tries to cram too many issues and characters in.

There isn't really much that differentiates Tru Loved from any other low-budget indie film. It isn't unique visually and a lot of the acting is what, at best, could be called amateur.

The film surely means well with enormous messages of tolerance and self-esteem, but when Loved digs in with broad caricatures of homophobia and all-purpose intolerance, the movie can be a supreme chore to sit through.

Tru Loved is worth a look for the supporting cast alone.

There are no featured audience reviews yet. Click the link below to see what others say about Tru Loved!