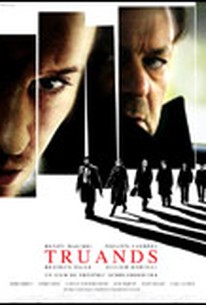 Secret Agents director Frederic Schoendoerffer teams with screenwriter Yann Brion for this violent crime drama concerning a brutal kingpin imprisoned by authorities, and the conflict that arises among his underlings as greed taking precedence over loyalty. Claude Corti (Philippe Caubere) is a ruthless crime lord whose creative use of power drills and metal rods have earned him both the fear and respect of the Paris underworld. When Corti is eventually captured by the police and sentenced to prison, the streets become divided by those who intend to carry on with business as usual, and those who see the departure as a notable opportunity for advancement. Beatrice Dalle, Benoit Magimel, and Olivier Marchal co-star in an unflinching look at a world where the only thing cheaper than life is loyalty. ~ Jason Buchanan, Rovi

There are no critic reviews yet for Truands (Crime Insiders)(Paris Lockdown). Keep checking Rotten Tomatoes for updates!

When the leader of a criminal gang operating in Paris is betrayed and sent to prison, different members of his former crew plot to take advantage and seize power for themselves. Paris Lockdown does not contain the mix of loveable rogues who love their mums that you'd find in the average Guy Ritchie movie. They are a bunch of ruthless, amoral bastards who'd screw over anyone to get ahead and as such it's far more believable and gritty than its British counterparts. The solid cast perform their roles as hateful mobsters admirably and the direction from Schoendoerffer is assured and taut making for a crime story so hard boiled it transcends entertainment into grim fascination; it's a bit like watching a natural history documentary as a pack of jackals rip each others' throats out fighting over a carcass. Add some well orchestrated and bloody violence and you get a tense thriller that's efficiently executed but without ANY likeable characters to connect to, it can feel more like watching the heavily armed inhabitants of a zoo enclosure than a story.