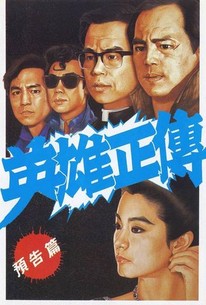 Che-Kirk Wong Chi-kueng updates Michael Curtiz's seminal 1938 gangster pic Angels With Dirty Faces to this 1986 kung-fu vehicle, starring Ti Lung and Brigitte Lin Ching-hsia. After the slaying of a cop during a gang war, mobster Ho Lung (Lung) leaves Hong Kong, abandoning his devoted girlfriend May and best friend Robert (Raymond Wong Pak-ming). Half a decade later, Ho Lung returns to the colony to discover that Robert has given up organized crime and become a man of God who tends after troubled teens. At first, Lung doesn't know what to do with Lung's charges but inevitably he starts to care for them as Robert does. Lung also learns that May is trapped in an abusive marriage with a crime lord named Kuk, who has him beaten when he discovers the two together. In retaliation, Lung swipes Kuk's ledger, which documents enough dirty deeds to lock him up for a long time. Lung demands May and a wad of money in return for the ledger, but when the swap goes awry, May is killed. When Robert's boys try to strike revenge, tragedy ensues.

There are no critic reviews yet for True Colors. Keep checking Rotten Tomatoes for updates!

There are no featured reviews for True Colors at this time.