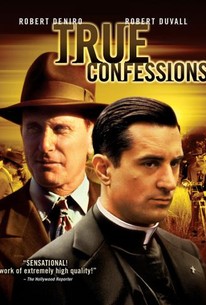 Adapted by John Gregory Dunne and Joan Didion from Dunne's novel, True Confessions uses the still-unsolved "Black Dahlia" murder as the foundation for a devastating attack on big-city corruption -- in which it appears that many of the perpetrators wear clerical collars. In, 1948 Los Angeles detective Tom Spellacy (Robert Duvall) is assigned to investigate the death of a priest, who apparently suffered a heart attack while being serviced by a prostitute. Meanwhile, Tom's brother, young Catholic monsignor Des Spellacy (Robert De Niro), is reluctantly currying favor with crooked contractor Jack Amsterdam (Charles Durning), the better to finance an expansion of Des' church. The unifying factor between Tom and Des, beyond their sibling relationship, turns out to be the grisly murder of a hooker. The key words in the labyrinthine proceedings are power, ambition, and hypocrisy. ~ Hal Erickson, Rovi

Harry "Slim" Duncan
as Priest at Banquet
View All

Des is another solitary soul, but perhaps he's the most subtle and accessible solitary De Niro has yet embodied -- a man whose isolation draws you closer instead of giving you the willies.

Two exciting, dangerous actors have little to do: Duvall spends too much time pacing and waiting; De Niro's big scene has him hanging up his vestments.

Given the powerhouse topline casting combo and provocative theme, True Confessions has to be chalked up as something of a disappointment.

Numerous vital characters are dropped and the case-solving stripped of its complexity, with the resulting film over-linear and one-dimensional.

True Confessions contains scenes that are just about as good as scenes can be. Then why does the movie leave us disoriented and disappointed, and why does the ending fail dismally?

Quite simply it's one of the most entertaining, most intelligent and most thoroughly satisfying commercial American films in a very long time.

The caustic and ironic tone of the original is lost in this film adaptation. [Full Review in Spanish]

A fascinating film that exposes the dark underside of the Catholic Church and fixes it firmly in the seedy, corrupt world of film noir.

An atmospheric, always-intriguing mystery that works equally well as a perceptive character study. One of the very best films of the 1980s.

"True Confessions" is one of the slowest films I've seen. And not only is it slow, but it has virtually no climax or plot and the ending just sort of happens. That being said, Robert De Niro and Robert Duvall give some good performances (the latter doing a better job) and there are some scenes that are particularly interesting, not to mention that the production design is impeccable.

With all the talent in front of the camera there is no way this should be as inert as it is. Visually impressive drama is not terrible but lumbers along to an indifferent conclusion. Watch L.A. Confidental, which presents a simiilar story in a superior manner, instead.

its a watchable film

Robert De Niro is just as convincing as a priest as he is a gangster or a madman. Thought this was a great character played by Robert Duvell. Enjoyed the story, although it was a little drawn out.

VERDICT: Watch it on tv, don't rush out and rent