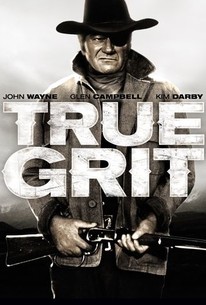 Critics Consensus: True Grit rides along on the strength of a lived-in late-period John Wayne performance, adding its own entertaining spin to the oft-adapted source material.

Critics Consensus: True Grit rides along on the strength of a lived-in late-period John Wayne performance, adding its own entertaining spin to the oft-adapted source material.

Critic Consensus: True Grit rides along on the strength of a lived-in late-period John Wayne performance, adding its own entertaining spin to the oft-adapted source material.

In fine Hollywood tradition, John Wayne had to play a "one-eyed fat man" before the Motion Picture Academy considered him worthy of an Oscar. In True Grit, Wayne plays grumpy, pot-bellied U.S. marshal "Rooster" Cogburn, hired by 14-year-old Mattie Ross (Kim Darby) to find Tom Chaney (Jeff Corey), who killed her father. The headstrong Mattie could have had her pick of lawmen, but selects the aging Cogburn because she believes he has "true grit" (she talks this way all through the picture, so be prepared). Also heading into Indian territory in search of Chaney is Texas Ranger La Boeuf (Glen Campbell), who wants to collect the reward placed on the fugitive's head for his earlier crimes. Complicating matters are Chaney's scurrilous cronies Ned Pepper (Robert Duvall), Quincy (Jeremy Slate), and Moon (Dennis Hopper), who have no qualms about killing a troublesome teenaged girl like Mattie. While the plot of True Grit, adapted (and streamlined) by Marguerite Roberts from the novel by Charles Portis, maintains audience interest throughout, the glue that truly holds this Western together is John Wayne, delivering one of his finest performances (though some believe he was better in She Wore a Yellow Ribbon). Wayne's casual charisma is infinitely more effective than the mannered method acting of Kim Darby and the floundering non-acting of poor Glen Campbell. And who could not love the climatic face-off between Duvall and company and John Wayne, whose "Fill your hand, you son of a bitch!" is not only a classic bit of dialogue, but the apotheosis of the Wayne mystique. In 1975, Wayne repeated his True Grit characterization opposite Katharine Hepburn in Rooster Cogburn, but the film failed to match its predecessor and the overall effect was blunted. ~ Hal Erickson, Rovi

Myron Healey
as A Deputy

Guy Wilkerson
as The Hangman

Connie Sawyer
as Talkative woman at hanging
View All

Far too often for True Grit to quite overcome, [Wayne's] larger-than-life turn flirts with, if not outright topples into, self-parody.

By growing old disgracefully as the fat, swaggering Rooster Cogburn, Wayne proves he can act -- and solves his own senior-citizen problem in one master stroke.

Although some say Wayne's Oscar was given out of sympathy instead of his performance, he still acts well as the sheriff who's past his peak.

Somehow it comes off like a TV celebrity roast.

It's mostly Wayne all the way. He towers over everything in the film.

Lazily directed by Hathaway, it's pleasant enough, if rather too self-consciously coy.

True Grit depends on that simple, no doubt reprehensible (at least emphatically illiberal), irrepressibly amiable star image the cinema is supposed to have out- grown.

Maybe it is not great cinema, but it is great entertainment.

John Wayne won his one and only Oscar for Best Actor in this exciting and riveting action-packed Western from Director Henry Hathaway that became one of the biggest boxoffice hits of 1969 in a year that was dominated with the return of the Hollywood Westerns that featured "Butch Cassidy and the Sundance Kid",and "The Wild Bunch". "True Grit" casts the legendary John Wayne,in the prime of his career playing Rooster Cogburn,an aging,hard-drinking,foul-mouthed United States Marshal who was once one of the West's best lawman in his prime. A teenage girl(played by Kim Darby)enlists his help in finding and tracking down the men responsible for brutally murdering her father. Along for the ride and adventure is country music superstar Glen Campbell,who not only sings the movie's theme song,but also makes his theatrical debut in this picture as a devoted and dedicated Texas Ranger who joins the odd couple in finding the killers responsible for her father's death,and bringing them to justice which will be a a task to deal with going against some dangerous desperados,among them Robert Duvall, Dennis Hopper,and Bruce Dern. This movie was also Oscar nominated for Best Original Song sung by Glen Campbell. This movie was so successful in 1969 that producer Hal B. Wallis brought John Wayne back in 1975 for the sequel to "True Grit" in the title role of Rooster Cogburn,but this time around screen icon Katherine Hepburn join him for the second installment. In 2010,directors Joel and Ethan Coen did the remake with Jeff Bridges in the John Wayne role that was also Oscar nominated for Best Original Adaptation Screenplay.

A fourteen-year-old girl hires and accompanies a grizzled U.S. Marshal on a mission to avenge the death her father. It's rare that a re-make is better than the original, but the Coen Brothers accomplished more with this story and the characters than its progenitors. As I watched it, I couldn't help comparing the two. Jeff Bridges's Rooster Cogburn had more character, a chatty, damaged drunkard, but John Wayne is all of these things but muted; Bridges is an actor who takes more risks, unafraid to be seen vulnerable. What we don't get with Wayne's performance is any clue about why Rooster is the way he is; he's just the force that John Wayne has always represented. I did like this iteration of True Grit because it's a fine story and the characters are inherently interesting despite how much more fleshed out they are in the Coen Brothers' version. Of all the westerns I've seen, this is one of the least racist (the portrayal of Asians leaves something to be desired), and the tale is full of class tropes of revenge and heroes. It's nothing to think too deeply about, but it's a solid three-star film. Overall, despite the strengths of the original True Grit, if you're only going to see one version of this story, you should see the latest one. Overall, despi

True Grit is a masterpiece and is one of the greatest westerns in film history. John Wayne is a amazing actor, and in this he is probably the best person in the world who could play Rooster Cogburn. Kim Darby was my one problem with this film, she was annoying and boring and a terrible actor to play Mattie Ross. The plot was fun and and a well made adaption from the book. Overall, a classic movie, and the funny thing is, this film is my fathers #1 favorite film ever made, he made me watch this, haha.

Having read the novel by Charles Portis and seeing the Coen Brothers version, and finally seeing this film, I thought that the original True Grit was a terrific and well acted Western film. This is actually the first film that I've seen with John Wayne in it. I have to say he is terrific in his role of Rooster Cogburn. The Duke pulls off a flawless performance of Portis' ruthless U.S Marshall. He definitely deserved that Oscar. The film at times feels a tad silly and uneven, but fortunately, the actors and well written script keep this film afloat and in the process create a fun, entertaining film that is a well done adaptation and as far as the remake is concerned, both films had a different twist on Charles Portis classic novel, and both succeeded in having the essence of the novel. This film is a more cheerful version of True Grit, while the recent version is a darker, colder and meaner version. But both films are wonderful. John Wayne and Kim Darby have great chemistry on screen, although it has to be pointed out that Kim Darby in this film is supposed to play a 14 year old girl, but the actress is in her early 20's. I thought that was slightlky odd, I mean they should've gotten a 14 year to play a 14 year, right? If you've enjoyed the book and want to see the first version of True Grit, then this is a good film to watch. The film is like I said a tad more cheerful than the recent version. This version is a well adapted version nonetheless and is a must see for John Wayne fans and fans of the book.