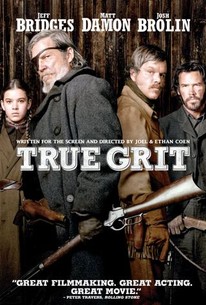 Critics Consensus: Girded by strong performances from Jeff Bridges, Matt Damon, and newcomer Hailee Steinfeld, and lifted by some of the Coens' most finely tuned, unaffected work, True Grit is a worthy companion to the Charles Portis book.

Critics Consensus: Girded by strong performances from Jeff Bridges, Matt Damon, and newcomer Hailee Steinfeld, and lifted by some of the Coens' most finely tuned, unaffected work, True Grit is a worthy companion to the Charles Portis book.

Critic Consensus: Girded by strong performances from Jeff Bridges, Matt Damon, and newcomer Hailee Steinfeld, and lifted by some of the Coens' most finely tuned, unaffected work, True Grit is a worthy companion to the Charles Portis book.

Domhnall Gleeson
as Moon (The Kid)

Maggie Goodman
as Woman at Hanging

Ruben Nakai Campana
as Indian Youth at Bagby's
View All

I thought the film was excellent... [But] Don't skimp on the development of female characters just because the complexities are difficult to represent. We're going to notice.

Henry Hathaway's 1969 adaptation was highly faithful... The Coens' movie is less faithful than Hathaway's but stronger - the production, by their regular team, is formally superb - and weirder.

Disappointing overall, though entertaining at times, True Grit isn't exactly the Coen brothers best movie but they get an A for effort.

With his leisurely growl, somewhere between trail-grizzled and post-nap, Bridges sounds as if he's talking through his collar, in a vocal performance that's entertaining no matter what he's saying.

Jeff Bridges is rough and rowdy marshal Ruben "Rooster" Cogburn, and manages to put his own stamp on the role made famous in 1969 by John Wayne. It's no surprise that he knows how to bring a wide palette of colors to this character, and he seems to be...

This True Grit is timeless.

I would go as far to say as it's an excellent, albeit very fannish piece of filmmaking and the best western of the last twenty years - but then there's not that many to choose from.

A wholly unnecessary remake, with every major event (as well as most of the minor ones) from the 1969 film finding its way into the script.

A good film that never flirts with greatness.

It is a fun film.

Without comparing the film to John Wayne's original of 1969, the Coen's version stands on its own with noteworthy performances by Jeff Bridges and newcomer Hailee Steinfeld.

What we get is a more faithful, near-pitch perfect adaptation of the original text which narrowly misses out on being classifiable as a Coen classic.

Out of all westerns I've seen (being only 3) this is probably the second best to me (Cowboys and Aliens being my favorite,) Its extremely well acted, the action, though very little, is still very well done, also the comedy is also pretty funny, though some of the comedy comes from how random some of the scenes are such as the bear guy. The film is also much like a horror movie, with some pretty brutal deaths and some pretty graphic frights like some hanging man they have to cut down from the trees. The one flaw I dislike about this movie is that Jeff Bridges is very hard to understand in a lot of moments in the film (Thank God for Subtitles on DVDs.) But overall this is a fantastic film.

Wonderful direction, strong performances from all, and beautiful cinematography add up to a great modern Western from the Coen brothers.

A mesmerizing epopee that evokes the true grandeur of classic Westerns, with a beautiful melancholy score, well-developed characters, a magnificent cinematography, endless memorable lines and top-notch performances, especially from Bridges and Steinfeld.

Top to bottom a solid retelling of the classic. The Coen Brothers do a wonderful job and Bridges and Steinfeld shine. I havent seen the original in years and have never read the book. But this an amazingly good film.