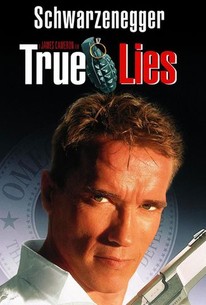 Borrowing liberally from the French film La Totale, this is an action picture, domestic comedy, and political thriller rolled into a crowd-pleasing ball of entertainment. Producer James Cameron wrote and directed the film. Henry Tasker (Arnold Schwarzenegger) is a workaholic computer salesman neglecting his mousy wife Helen (Jamie Lee Curtis), a legal secretary. Simon (Bill Paxton) seduces Helen with the lie that he is a secret agent; he's really a used car salesman. Harry suspects that Helen is cheating on him, and he sends a few colleagues to kidnap them. Helen then discovers that Harry is a secret agent by night, working for a shadowy group called the Omega Sector. Harry and his partner Gib (Tom Arnold) are trying to find four nuclear warheads that have disappeared from a former Soviet republic.

Louai Mardini
as Breadvan Terrorist No. 1

Gino Salvano
as Breadvan Terrorist No. 2

Tom Isbell
as Reporter at Hi-Rise

John Bruno
as Custodian
View All

Schwarzenegger's comic confidence and good-guy tenacity are a perfect balance, while Curtis wins our sympathy as his repressed wife, showing some deadpan drollery of her own.

Proves that throwing everything at the camera sometimes works a treat.

If the Gulf War gave you an insatiable taste for burning oil and burning Arabs, this extravaganza will tide you over for at least a couple of days.

Providing its share of fun in stretches, pic ultimately overstays its welcome with a level of mayhem that will simply feel like too much for any marginal fan of the genre.

Half the time, this hi-tech action movie delivers, in a mindless kind of way: it's fast, crude and has enough explosions and cartoon-style violence to satisfy our baser instincts.

As this comedy of manners unfolds, it is played for all-out action as well as satiric humor.

A Cameronian slog of epic proportions featuring a lot of complicated action scenes, bombs, and racist portrayals of people from the Middle East, all led by Schwarzenegger whose charm dulled with the new millennium.

A lot of the amusement springs from the fact that the bad guys get it real good, as only the likes of the musclebound Schwarzenegger can render.

True Lies is a good but not great movie. It has phenomenal set pieces and a good cast, but it's tough to totally argue for a movie with such bad things attached to it

TRUE LIES should get a remake and benefit from all of the special effects breakthroughs that James Cameron has championed in the last twenty-five years and get rid of the basic racism and sexism that otherwise besmirch a fun, action-packed movie.

After Harry handily humiliates Simon at every turn, True Lies charges back into its anti-Arab jihad.

Writer/director James Cameron has made his fair share of groundbreaking, great movies, but pound for pound True Lies is his most flat-out entertaining.

One of my favourite action films, with plenty of humour almost like 2 films in one!

For an Arnold Schwarzenegger action-comedy film, this feels much more like the French thriller it's based on and less like a cheesy, over-the-top slaughter. James Cameron wrote and directed this film, and he makes another blockbuster action film feel like legitimate entertainment. There's a satiric intelligence and thoughtful touch to this film, and though filled with terrorism and political themes, it's less about a secret agent and more about a marriage. The gimmick of the film is that mild mannered salesman Harry Tasker is secretly an agent for the United States' government and hides it well from his wife and daughter. Most of the film follows this husband and wife around, as a series of misfortunate choices and misguided attempts at being truthful and/or provocative, keep the pair at odds. In a series of events that one would call morally questionable, Harry follows his wife as she tries to find a sense of danger in her life. This lends to the narrative of the terrorist leader launching an attack on the US for senseless violence overseas. Even though much of this revolves around some very farfetched ideas, and the antagonist is outrageous, it's Cameron at his most divisive and calculated. He knows what feels right in an action film, and even tries his hand at comedy, and that isn't always easy. Much of what makes this enjoyable solely lies in the performance of Jamie Lee Curtis, who is both right as the suburban mother and surveyor of action, and as the seductress. While Schwarzenegger does the job of action hero to credit as always that's all that can be said. As always there isn't much difference between this and any other Schwarzenegger performance, though he is perfect for this film, even if the role certainly calls for an American. Mostly it's a film to watch and go agog at the timeless special effects and fight scenes, and even for a chuckle once in a while.

James Cameron imagines "what if James Bond was married and didn't tell his wife what his job was?" Ah-nold and Jamie Lee supply oodles of chemistry. See how many times you can spot the stunt doubles! Tom Arnold's great as the sidekick.

From what I remember of this movie many years ago is that is falls short in the comedy department, but makes up for it in the action department. For its time, it is a good movie that will keep you entertained; although not Cameron's best, it is definitely worth watching.