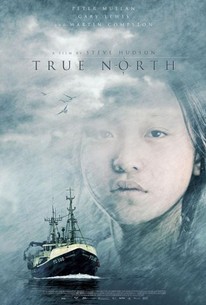 Writer/director Steve Hudson patterned his debut feature, True North, after classic Greek tragedy. This bleak and despairing drama concerns the Skipper (Gary Lewis) and Sean (Martin Compston), a father and son from the U.K. who co-pilot a small fishing boat called Providence. Though the Skipper remains aboard, Sean inherits all financial responsibility from his dad. But times are hard and the catch so inadequate that it cannot sustain the men. Terrified of being regarded as a failure by his father, Sean devises a dangerous scheme: he and deckhand Riley (Peter Mullan) will illegally pull Chinese immigrants from the far side of the North Sea while the Skipper sleeps, collect money from the stowaways, hide them in the ship's hold, and deposit them in northern England. All goes according to plan until Sean realizes that they must locate some actual fish to mislead the British authorities. Meanwhile, the Chinese passengers begin to waste away below deck, while a storm and other unforeseen catastrophes threaten the lives and safety of everyone aboard. The picture subsequently builds to a devastating conclusion. Steven Robertson and Angel Li co-star. ~ Nathan Southern, Rovi

The daily struggles of life at sea, as well as the almost manic revelries indulged in to forget about it, are evoked with dark wit.

If only the characters were a little less stock and the script more waterproofed. Halfway through our journey, the cliches start seeping in.

In many ways it's a disturbing story and Hudson offers few gestures of absolution, but those tiny chinks of light are all the more powerful because of it.

A tense thriller with an important social message.

The filmmaker is obviously driven by important concerns, and has found a means of representing them, at least in part.

A sobering and sad story of the terrible cost of a lack of moral fiber. Not a happy yarn, but it's been well-acted, and afterward you'll feel as if you've been at sea for a week.

The film has its moments, but it's a crude, none-too-convincing piece of work that fudges some serious issues.

A powerful and thought-provoking film that succeeds equally as sad human drama and compelling thriller.

There are no featured audience reviews yet. Click the link below to see what others say about True North!