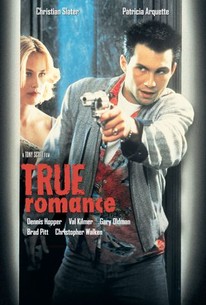 Critics Consensus: Fueled by Quentin Tarantino's savvy screenplay and a gallery of oddball performances, Tony Scott's True Romance is a funny and violent action jaunt in the best sense.

Critics Consensus: Fueled by Quentin Tarantino's savvy screenplay and a gallery of oddball performances, Tony Scott's True Romance is a funny and violent action jaunt in the best sense.

Critic Consensus: Fueled by Quentin Tarantino's savvy screenplay and a gallery of oddball performances, Tony Scott's True Romance is a funny and violent action jaunt in the best sense.

Quentin Tarantino scripted this wild and wooly blend of action and dark comedy, which reached theaters a year before his breakthrough hit Pulp Fiction. Clarence Worley (Christian Slater) is a well-meaning but socially unskilled comic-shop clerk whose idea of a big night out is catching a Sonny Chiba triple-feature at a downtown grindhouse. Clarence is celebrating his birthday in just such a manner when he meets a beautiful girl named Alabama (Patricia Arquette), and it's love at first sight for both of them. Clarence's enthusiasm isn't dampened much when he discovers Alabama is actually a prostitute who was paid by his boss to bump into him; she's only been in the business for a few days, and is more than eager to give up streetwalking to be with Clarence. However, Alabama is certain her pimp, Drexl (Gary Oldman), will not be happy; he's an ill-mannered sort with mob connections and a fondness for violence. Chivalrous Clarence offers to break the news to Drexl and collect her belongings, but he doesn't tell her he also plans to kill Drexl while he's there; a melee breaks out that leaves Drexl and his henchmen dead. Clarence grabs a suitcase that he thinks contains Alabama's clothes, but he discovers it instead holds five million dollars' worth of cocaine. The couple hits the road for California, planning to sell the dope and enjoy the good life in South America with the proceeds, but soon a group of very unhappy underworld characters are after them, as well as the police. True Romance also stars Dennis Hopper as Clarence's father, Christopher Walken as a mob boss who wants his cocaine back, Brad Pitt as a cheerful stoner, and Val Kilmer as the ghost of Elvis Presley. ~ Mark Deming, Rovi

This is the realm of meta-cinema, where those who make movies, those who long to be in them and those who model their behaviour on them all come together to contrive between them a classic movie climax: a shoot-out...

This is the best film Quentin Tarantino never made.

The whole thing rattles along like that pink Cadillac they're driving.

If shoot-'em-up, gobble-'em-down movies like The Fugitive and Jurassic Park are rated PG-13 these days, what does an R-rated action adventure look like? Like True Romance: violent to a fault, glam to the max.

Provides some amazing encounters, bravura acting turns and gruesome carnage. But it doesn't add up to enough.

Admittedly, the model is still weird, filled with unexpected twists and poetic outbursts, but in this case, the offspring is equally creative in its sense of verbal sequence. [Full Review in Spanish]

Tarantino only writes stand- out scenes. The plot moves from one brilliantly off-beat moment to the next.

The only thing that goes wrong with the movie is Christian Slater... the failure of its central character ends up being an irritation, but not a film-crippling problem.

...a pulpy good time that holds up remarkably well two decades after its theatrical release...

Written by Quentin Tarantino, and starring some of the best talent in Hollywood today, "True Romance" is just as much a great romance as it is a terrific action thriller. I loved every bit of this film, and the dialogue really is what drives this awesome picture. It may go off the rails a bit for me in the end, with a bit too much action and less substance, but the first half of the film has so much substance, that you can forgive the second half for wanting to be more exciting. I can't see myself wanting more from this film, aside from a few more scenes like we saw in the first 30 minutes, focussing on the romance of the two leads. Those scenes were so well-handled that I felt the need to see so much more of that, but I understand that we eventually had to go on to bigger and better things. If it wasn't for the performances by Christian Slater and Patricia Arquette, I would not have liked this movie as much as I did. Overall, it's a terrific story that is executed by Tony Scott in the best way possible. Highly recommended.

True Romance is a stellar romantic crime film that is brilliantly directed by Tony Scott with a well written script by Quentin Tarantino. With a great cast of terrific actors, True Romance is a must see crime picture that is sure to delight movie buffs. This is an exhilarating and highly entertaining film from start to finish that illustrates the brilliant direction of Tony Scott and original writing style that has Quentin Tarantino famous. This is one of the best crime films that I have seen, and the cast itself is one that is sure to delight filmgoers everywhere. Every actor here gives something to the film to make it that much better, and the two leads were great as well. There are some darkly humorous parts here and there to compliment the serious tone of the film, and everything works well enough to keep you engaged from start to finish. Over the course of his career Tony Scott has made some great films. Forget Top Gun as being his best, it isn't. This is his strongest effort. I feel that he really became a confident director with this movie, and he felt even more comfortable behind his camera. Top Gun was a decent affair, but quite overrated. But True Romance is his masterwork. This is simply put an effectively well directed picture that has a truly unique, crazy plot with a memorable cast of talented actors. Tony Scott and Quentin Tarantino have created something great here, and it delivers a truly awesome film going experience that you soon won't forget. If you come across True Romance, definitely give it a view, you won't be disappointed. Tony Scott would direct much more exhilarating films in terms of pulse pounding action, but they would also be fairly hit and miss. But with True Romance, he uses the basics of a simple plot, and it makes for a much more convincing and enjoyable movie.

A total blast. A wildly fun, twisted and original thriller. It`s thrilling, wickedly funny and filled with explosive action. Director, Tony Scott crafts a modern day Bonnie and Clyde with a full dose of adrenaline, style, stars and cool. Writer, Quentin Tarantino develops a great script of compelling characters and over the top madness. A sensational all-star cast. Christian Slater and Patricia Arquette are wonderful together they shine with their irritable chemistry. Christopher Walken and Dennis Hopper are brilliant. James Gandolfini is terrific.