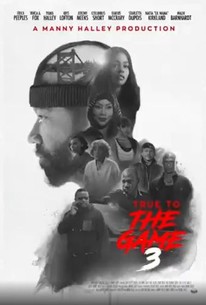 True to the Game 3 Videos

This action-drama is based on the urban fiction novel penned by Teri Woods and serves as the second sequel to the 2017 original. Directed by David Wolfgang, this sequel follows the events that were kept hanging in the previous film, still featuring the story of Gena (Erica Peeples), the Philadelphia native turned heist leader whose low-key life with her grandmother Gah-Git (Starletta DuPois) is upended when she meets Quadir (Columbus Short), the drug dealer. She nearly loses her life, but Quadir-initially thought to be dead-saves her as they both evade the feds and the cops alike.

Columbus Short
as Quadir
View All

Critic Reviews for True to the Game 3

There are no critic reviews yet for True to the Game 3. Keep checking Rotten Tomatoes for updates!

There are no featured reviews for True to the Game 3 at this time.

True to the Game 3 Quotes