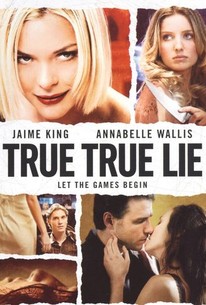 Released back into society after being locked away in an insane asylum for twelve years, a fragile former patient is haunted by suspicions that she and her two best friends murdered a young boy when they were just children. As a young girl, Dana (Lydia Leonard) played a fateful game of Truth or Dare with her best friends Nathalie (Jaime King) and Paige (Annabelle Wallace). Reunited with her two best friends shortly after her release, Dana once again plays the game that led to her breakdown and loses her ability to discern reality from fiction.

There are no critic reviews yet for True True Lie. Keep checking Rotten Tomatoes for updates!

Good premise, terrible acting. I was expecting a lot more, but the end was shocking.

Suffers a bit from a flat ending, but actually pretty good for a straight-to- dvd, (I assume), thriller with B-grade cast. Jaime King is impressive - looks like butter wouldn't melt, but so evil! I was pretty enthralled through most of this, a twist at the end would have worked better, but still pretty good.