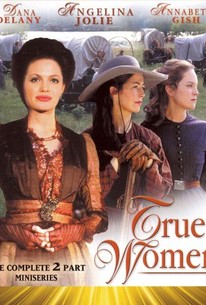 Based on a true story, this Civil War-era epic centers on the exploits of Sarah Ashby McClure (Dana Delany) and her sister Euphemia (Annabeth Gish) as they try to make their way on the male-dominated West Texas plains. When their home is threatened by Mexican forces and Native American warriors, the sisters lead their family and friends to safety. Based on the book by Janice Woods Windle, True Women also co-stars Rachael Leigh Cook, Angelina Jolie, and Tina Majorino.

Dana Delany gives a towering performance as a charismatic and courageous Texas woman whose spirit is tested again and again.

This film is "Angelina jolie" Standing up for her acting credintials and her reputation. This fully secured her amongst the ranks of the 90's top actresses.