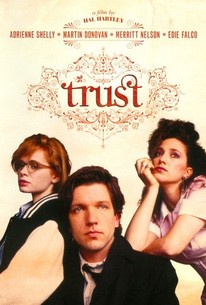 The unlikely relationship between a pregnant high school student and a brooding electronics repairman lies at the center of this droll comedy from writer-director Hal Hartley. Intelligent but unconventional, Maria (Adrienne Shelly) has more to worry about than her pregnancy, as her expectant state drives away her boyfriend and triggers a fatal heart attack in her father. Meanwhile, Matthew (Martin Donovan) has his own problems: an abusive father, a heightened sense of morality that prevents him from taking semi-lucrative television repair jobs, and a suicidal streak that causes him to carry around a potentially deadly grenade. The meeting of these troubled minds at first promises to be beneficial for both, but sours as they are forced to interact with each other's dysfunctional families. As in all of Hartley's pictures, the narrative is filtered through an amusingly detached sensibility that some may consider an acquired taste.

John A. MacKay
as Jim Slaughter

Jeff Howard
as Robert
View All

Hal Hartley is on his way to creating a distinctive film world, and although Trust is not a successful film, you can see his vision at work, and it's intriguing.

Hartley questions the responsibilities of adulthood and the broken family ties of the middle-class American dream, but at times his humor seems mechanical and the existential crisis of the characters is routinely resolved. [Full review in Spanish]

A romantic mirage from the ruins of the 1990s American independent movement, which still has fans if no financiers... a treasure, an indelible document of misgivings and longing and fated love.

Reflecting idiosyncratic sensibility, Hal Hartley's families don't look like Hollywood or TV families: When a father calls his daughter a slut, and she slaps him, he drops dead.

A bold film that defies logic and the rules of screenwriting

It's Woody Allen with gentile instead of Jewish neurotic characters.

Best comedy of the nineties

Watched this many, many times over the years. My first Hal Hartley film, and one of my favourites. Adrienne Shelley and Martin Donovan are both perfect in their roles. I just love the style and the understated way the movie is written. Fantastic.

Likely my favourite of the Hal Hartley's. It is an unlikely pairing of two lost souls and Donovan and Shelly prove up to the task.

I saw this movie a while back on IFC and I really liked it. This movie is quirky and the dialogue is great.