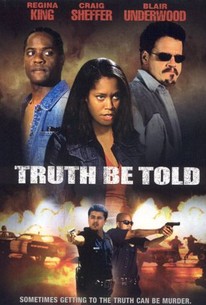 The truth doesn't come easy, and when the truth involves the mob, the police, and the vengeful survivor of a gangland massacre, it comes screaming in a hail of bullets in this tough-as-nails crime drama from King's Ransom director Jeff Byrd. Left for dead by the mob and then used by police to draw out the same men who nearly sent her to an early grave, Rayne Johnson (Regina King) is caught up in the middle of a battle that's about to blow up. As tension mounts and loyalties shift, the line between good and evil is blurred and Rayne soon learns that the only person she can trust to get her though this mess alive is herself.

Brad Spencer
as Officer #2
View All

Critic Reviews for Truth Be Told

There are no critic reviews yet for Truth Be Told. Keep checking Rotten Tomatoes for updates!

There are no featured reviews for Truth Be Told at this time.