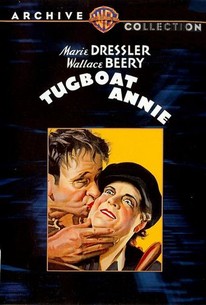 Marie Dressler plays the title character, tugboat captain Annie Brennan, in this 1933 Hollywood box office hit. Her husband Terry (Wallace Beery) is a lazy, bragging drunk. Robert Young plays their son Alec, who has big ambitions and winds up as captain of a fancy ocean liner. The ocean liner's owner is Red Severn (Willard Robertson), whose daughter Pat (Maureen O'Sullivan) is the object of Alec's longings. Young tries to get his mother to leave his father and join him on the ocean liner, but she refuses out of love for her husband and her tugboat. Terry crashes the tugboat while drunk one night, and it is sold at an auction, then repaired and converted into a garbage boat. Sequels were made in later years, with Marjorie Rambeau and later Jane Darwell in the title role, and it was made into a TV series in the 1950s.

Frankie Darro
as Alec as a Boy

Robert McWade
as Mayor of Secoma

Willie Fung
as Chow the Cook

Sam Harris
as Onlooker
View All

A formidable performance. The rest is of no interest. [Full review in Spanish]

It is worth staying if only to see Beery's heroic exploit (I am not sure exactly what he does) which is very well staged.

An enjoyable diversion that provides Dressler with ample opportunities to flex her acting chops.

There are no featured reviews for Tugboat Annie at this time.