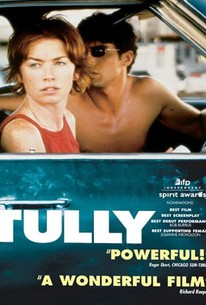 Taking home both the audience prize for Best Director as well as the critics' prize for Best Film, writer-director Hilary Birmingham was the toast of the 2000 L.A. Independent Film Festival with this slice-of-life drama about a pair of motherless young men and their relationships with women. Tully Jr. (Anson Mount) and Earl (Glenn Fitzgerald) live on their father's Nebraska ranch, proud and independent to a fault. While the shy, reclusive Earl spends his free time watching movies, the cockier Tully works his way through a succession of short-term affairs and an off-again, on-again relationship with April (Catherine Kellner), a stripper in town. When their childhood friend Ella (Julianne Nicholson) returns to town to start a veterinary practice, however, Tully falls for her -- although the townsfolk have their doubts that he could ever commit to one woman. Birmingham based her film on a short story by author Tom McNeal; before Tully, the director cut her teeth producing PBS documentaries. Tully would go on to show at festivals in Toronto, Canada, and Melbourne, Australia.

Mount and Nicholson make a fascinating pair, a country boy-womanizer who meets his strong-willed match.

The movie resonates with a rare and genuine sweetness.

Watching Tully reminded me of a time when calling a movie 'little' was a compliment, a way of saying a director had found ways to locate his movie in a world that seemed entirely real.

At turns heartbreaking and heart-stirring.

There's certainly nothing objectionable about Tully, but there's nothing remarkable either. It resides in that cinematic middle ground of not-bad, not-great, just okay.

Tully is worth a look for its true-to-life characters, its sensitive acting, its unadorned view of rural life and the subtle direction of first-timer Hilary Birmingham.

Best to just pick up a blade of grass and chew on it while absorbing the scenic imagery and natural acting of a strong cast.

The revelations... are not in the plot but in the rhythm of life and the pace of days (brought to life perfectly in the crisp, bright, sunlit photography)...

A heartfelt, understated and occasionally heavy-handed slice of heartland.

It's a promising debut made even better by an impressive bunch of actors.

It brims with characters, incidents and dialogue that are alternately sharp and lyrical, and sometimes both at the same time.

A quiet film, about a quiet man and his two sons, living on a farm in Nebraska. Tully (Anson Mount), is the elder son, and a twenty-something Lothario who believes himself irresistible to women. His younger brother, Earl (Glenn Fitzgerald), works hard and plays clean. A straight-arrow neighboring girl, Ella (Julianne Nicholson), is friends with Earl and becomes entangled with Tully. The father, also named Tully (Bob Burrus) just goes about his business, quietly and efficiently, without humor, until he gets notice that his farm is being foreclosed. It is in this scenario, that lies that have been told for years and secrets left unspoken begin to come to light. The scenery evokes the prairie life, and the characters are people it becomes easy to sympathize with. The pleasures of hard work and simple recreations enhance the filmâ(TM)s easy pace. Not a lot happens, but what does happen is significant. This was a good story about good people making hard choices.