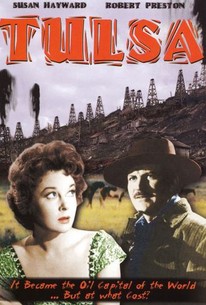 Tulsa was, in 1949, the most elaborate production released to date by the Eagle-Lion corporation-though all evidence, especially the technical credits, suggests that the film was put together at Universal-International, then merely distriibuted by Eagle-Lion (who made a fortune at the box office). The film traces the matriculation of the sleepy Oklahoma village of Tulsa into a major oil center Susan Hayward stars as an amibitious cattleman's daughter who wishes to wreak vengeance on the encroaching oil interests but who becomes a "black gold" mogul herself. Robert Preston costars as a geologist who hopes to rescue his beloved Oklahoma from being utterly devastated by drilling and derricks. This being a late-1940s film, Greed runs a poor second to Good at film's end, with the oilmen and the conservations learning to work together rather than as bitter enemies. While the story is a good one, the true selling angle of Tulsa was its action sequences, notably a fire scene that must have cost as much as all the other Eagle-Lion releases of 1949 combined. Originally lensed in vibrant Techicolor, Tulsa is usually seen today in washed-out, two-color Public Domain prints.

Nolan Leary
as Man with Newspaper

Susan Hayward plays one of her typical tough, ambitious women in this romantic adventure, a chronicle of the emergence of Tulsa as the land of oil.

It's at best an average American Dream story, told in a soap opera, cliché-ridden and glossy style.

It seems a bit ironic watching this movie today. We should have heeded Cherokee's ultimte lesson and been more concerned with conservation and less with outrageous profits. A good film overall.